Review of: I Capuleti e I Montecchi

Produced by:
Pop Up Opera

Opera for the modern audience, this is a fantastic, visceral production by a unmissable company. 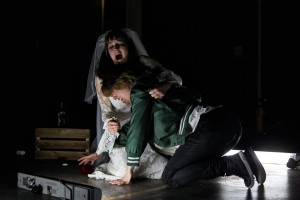 When one thinks of opera, common images which comes to mind are of massive, opulent auditoriums, with full live orchestras led by a conductor in a tailcoat, and ‘stand and sing’ performances prioritising the beauty of the music over the believability of the acting. Only one of these things holds true in a Pop Up Opera production: the beauty of the music. In contrast to the stereotype, the acting is convincing, the staging minimalistic, and the full score played live by an exceptional pianist. This was one of the most exciting pieces of theatre – let alone opera – I have seen this year, mainly due to the strength of the dramatic choices and musical performances.

The company’s speciality is staging touring operas across the country in various non-traditional locations, such as boats, barns, and basements – often in historic venues such. The 30th March performance in the Carosel London gallery put the audience on all sides of the action, and very close to it. This opera is not viewed through binoculars from the upper galleries but is instead incredibly personal and never dull. While any performance at this close of quarters is exciting, it is even more so when it is a stereotypically inaccessible art – this is not an easily forgettable experience.

This young touring company tackles its first tragedy, Bellini’s I Capuleti e I Montecchi, this year. This lesser-known bel canto work, here seen in a twentieth century mob setting, is a loose retelling of Romeo and Juliet, though skips the light-hearted romp at the play’s beginning right for the tragedy at the end. It is fair to say that Bellini takes many melodramatic artistic liberties. Despite the heightened plot filled with disguise, torture, forbidden love, gang warfare, and suicide, the performers never overact. Instead, they are human figures caught in extraordinary circumstances, and the production certainly does not shy away from the uglier elements. Were the music to be taken away, the play would be entirely believable – a sign of immense accomplishment on the part of the performers and director.

The cast of I Capuleti e I Montecchi rotates night to night, with each role double-cast. The performers I saw were exceptional: Alice Privett was a Giulietta worn into a nervous wreck by her secret love affair and family pressures, Flora McIntosh was a reckless Romeo with a death wish, Matthew Palmer a stoic yet conflicted Lorenzo, Cliff Zammit Stevens an impetuous Tebaldo, and Andrew Tipple a headstrong Capellio. I can imagine that the other performers are equally strong, compelling, and nuanced, and it would be a privilege to see what each brings separately to their roles.

As to be expected, the music is executed extraordinarily. The singers are never off pitch – even with only a piano backing them up – and the talented Berrak Dyer on the piano soon makes one forget that there is not a full orchestral score behind the melodious, powerful voices. The singing is all in the original Italian but subtitles were projected on three walls, allowing the audience in the round to understand the language. A few arias were translated in full, but most scenes gave only a few lines of approximate translation. This allows the audience to get the gist of the narrative while paying full attention to the action, which is an excellent and effective creative decision.

The staging is minimal and mobile – not just from site to site but also throughout the performance; for instance, chairs are rearranged to denote new settings and suitcases double as both drawers of love letters and runaway gear. Even the lighting is mobile and operated by the performers; these portable units are carried as torches, used to demarcate scene changes, and painfully forced to shine upon characters under interrogation. While bel canto translates to ‘beautiful singing’ and characterises early nineteenth century Italian opera such as this one, the staging veers towards the gritty verisimo traditions of the late nineteenth century to the present day, and it works.

I have seen few companies or productions which make such a classic art so immediate, accessible, and exciting. If I Capuleti e I Montecchi is coming to a theatre near you on its tour throughout London and indeed the country, do not hesitate to book your tickets. You will not regret the two visceral hours of music and doomed love.

Tickets are purchased from each individual venue, but links to all sites and ticketing can be found at http://popupopera.co.uk/whats-on/current/bellinis-capulet-montecchi/

Admission prices vary by location/concessionary level and range between £6-25.

Cast (all in rotation):