Bridge Arts Theatre's PARTY is a hilariously wacky production that delivers big laughs thanks to its stellar cast.

In today’s political climate, tensions are running high – Donald Trump is running rampant in the US; UK MPs are fiercely debating the potential outcomes of ‘Brexit’; and in British suburbia, five young adults are attempting to form their own political party in a garden shed. This last statement seems somewhat weirdly plausible when considering the current state of affairs, but it is in fact the premise of Party, Tom Basden’s 2009 play currently being performed by Bridge Arts Theatre. With a continuous barrage of slick, sharp comedy executed by an impressive cast, this production hilariously comforts us in the knowledge that, despite the potentially turbulent times hurtling towards us, at least our politicians will be nowhere near as inept as Basden’s characters. We hope. 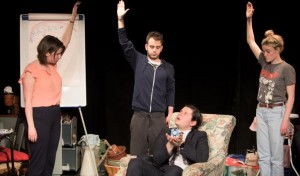 The show begins with a democratic vote – Jared, Jones, Mel and Phoebe have their arms raised in agreement, as Duncan stares confusedly at the present proceedings. He is a new addition to the group, allowed into the party only because his stepfather owns a printing shop. Eventually he raises his arm, and a unanimous vote is cast. What were they voting on? Why, to determine whether or not they are “‘for’ China”. What does “‘for’ China” mean exactly? No one seems to know, and as the play continues their cluelessness does not improve; constructive debates are immediately derailed by arguments over the pronunciation of “abstentions”, Richard Gere movies, and the departure of an old party member, who Jared may or may not have groped after supposedly mistaking her breast for a doorknob. Jokes like these come thick and fast in Party, and although there were a couple of over-lengthy silences that broke the rapid pacing, the delivery of Basden’s farcical humour hit the mark wonderfully.

Certainly, the comedy is the most crucial component of Party, as there is not much of a plot to speak of – the characters are quick to avoid any semblance of narrative resolution. In other words, they don’t really do anything. Instead, Basden’s main characters serve as stereotypical representations of the hyper-political student or recent graduate – fiercely passionate about politics as an overarching concept, but possessing a complete and utter lack of knowledge. Mel, played by Elizabeth Hope, pushes the pastiche even further, spouting anarchist/Marxist sentiments with The Clash brandished proudly on her shirt. Watching Party feels like watching an episode of The Young Ones, only the stage was crowded with Ricks trying desperately to have their opinions heard; I fully expected to hear someone eventually proclaim themselves “The People’s Poet”, or start reciting their “Ode to Cliff Richard”. Fortunately, Director Zach James constructed clear personality traits for each character, prompted by Basden’s script, and carved out some features of individuality so that the constant collective buffoonery had variation, and did not become monotonous or tedious. A particular mention must be given to Jared, played superbly by George Vafakis, whose overbearing gesticulations and lilting pronunciations were gloriously patronising, as he proclaimed himself the most likely candidate for future Prime Minister. 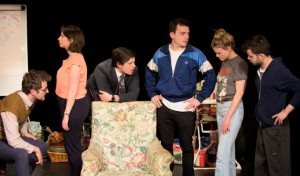 On the other hand, there were moments where the stereotypical representations were pushed a little too far, and with Phoebe and Duncan in particular, the unique aspects of their characterisation sometimes became consumed by their already-established ineptitude. They are both clearly the most clueless of the group, if a distinction must be drawn, but just as Jared, Mel and Jones have other aspects to their personalities, so do Duncan and Phoebe: Duncan has intriguing personal shifts throughout the play, and Phoebe is the only character that has a connection to a world outside of the shed, yet on occasion these potentially humorous developments were overrun. Without as much variation as the other characters, the comedy repeatedly exacted from their scatter-brained nature on occasion felt over-exaggerated, and so the jokes didn’t always land.

The only moment in which the audience were given a brief respite from the ridiculous rhetoric of the unnamed party came with the appearance of Phoebe’s one-night stand Shortcoat, played by Steve Hodgetts, whose unfortunate title stemmed from the fact that Phoebe could not remember his name (for those curious amongst you, it’s Nathan). As the straight-man, Hodgetts received some of the most uproarious laughter of the night, despite the fact that he was onstage for less than ten minutes, though ‘straight-man’ might be a loose term; it was difficult to take him wholly seriously, as he wore a crop-top sports jacket (hence the name “Shortcoat”). Amongst this hapless bunch he served as an anchor of sanity for audience, but it is for this reason, and the fact that he actually studied Political Sciences at university, which immediately gets him ejected from the shed – clearly there was no room for genuine knowledge in Basden’s play. The antithesis that Shortcoat’s arrival created had the potential for a lot more humour, so it was a shame to see him leave so soon, but Hodgett’s performance made sure that the character left a lasting impression.

Bridge Arts Theatre’s Party is an immensely entertaining production, as it uses an endless stream of hilarious comedy to poke fun at the potential future of British politics. Should we worry if a political party such as this emerges from the woodwork? Without a doubt. But for now, thankfully, they are confined to The Pleasance Theatre, and will not be appearing on the global stage any time soon.

Party will be continuing its run at The Pleasance Theatre, Islington until March 13th, with 7:45pm performances Tuesday-Saturday, and 5:30pm performances on Sunday 6th and 13th. You can book your tickets from 020 7609 1800, info@pleasance.co.uk or https://www.pleasance.co.uk/event/party/performances.