Last year Paines Plough rocked the nation with some of the best new writing and adaptations performed in a variety of venues including their Roundabout theatre – entirely portable and assemble-able (is that a word) with a single allen key. This year they’re back for even more – hitting the Edinburgh festival before travelling across the nation.

“We’re raring to hit the road to the four corners of the UK with this cracking programme of new plays from some of the most exciting writers around. Roundabout will pop-up across the country with comedies from Luke Norris and Alan Harris, a superhero tale for children from Katie Douglas and a host of events from international visiting companies and local community groups, bringing a festival feel to every place it visits.

We’re honoured to be working with talents as innovative as Sabrina Mahfouz – whose UK Garage musical is theatre you can rave to – and Tom Wells whose heart-warming new play will delight fans of his previous Paines Plough hit Jumpers For Goalposts. With Every Brilliant Thing returning to the UK after an international tour, London stories in Come To Where I’m From and new plays from Elinor Cook, Nathan Bryon, Lucy Gillespie.”

The Roundabout season will preview from 19 – 24 July at Hackney Showroom in London before taking up residency once again at Summerhall during the Edinburgh Festival Fringe from 4 – 29 August. 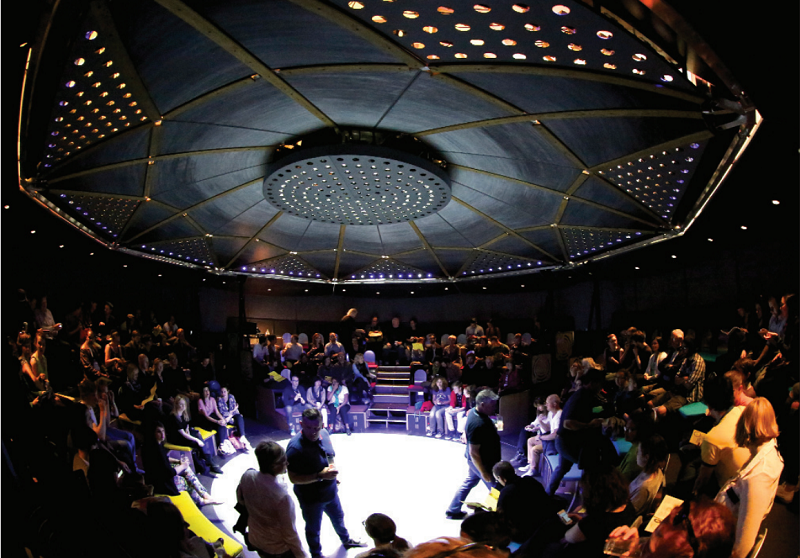 In rep will be three World Premieres – first of all comes Love, Lies and Taxidermy, a Paines Plough, Sherman Cymru and Theatr Clwyd production by Alan Harris , ‘an offbeat love story about Mr. Tutti Frutti, a stuffed owl and the struggle to fit in’.

Secondly comes Growth, a comedy about growing up and manning up from rising star Luke Norris (So Here We Are, Royal Exchange;Goodbye To All That, Royal Court). Finally comes a Paines Plough and Half Moon production in the form of I Got Superpowers For My Birthday by Katie Douglas –  an epic quest to save the planet in this brand new play for ages 7+ from award winning writer Katie Douglas.

Roundabout will again host a programme of visiting companies at the Edinburgh Festival Fringe and on tour, and see the return of EARLIER / LATER, Paines Plough’s early morning and late night series of one-off shows, events, workshops and more. Following the run in Hackney and Edinburgh, Roundabout will tour to Salford, Cornwall, Margate, Lincoln, Kendal, Barnsley, Stoke and Luton.

The remainder of the programme is as follows:

Following the current UK tour Sabrina Mahufouz’s play-come-gig With A Little Bit of Luck will come to The Roundhouse from 14-18 June as part of The Last Word Festival. Originally commissioned for a festival audience, With A Little Bit Of Luckpremiered to standing ovations at Latitude Festival in 2015. The production features Seroca Davis as Nadia alongside the vocal talents of Martyna Baker and musician Gabriel Benn, directed by Stef O’Driscoll.

Produced by Paines Plough and Latitude Festival, With A Little Bit of Luck is rhythmically underscored by a live mix of old school UK Garage as award-winning writer Sabrina Mahfouz explores the legacy of a cultural movement that defined the hopes of a generation.

Following an international tour, the hugely acclaimed Every Brilliant Thing by Duncan Macmillan with Jonny Donahoe will embark on its third nationwide tour in autumn 2016. A play about depression and the lengths we go to for those we love which has won plaudits around the world, Every Brilliant Thing will return to the UK in September visiting Maidstone, Alton, Worthing, Corsham, Aldershot, Preston, Berwick, Selby, Taunton, Isle of Wight, Dorchester, Chichester, Lincoln and Otley.

A Paines Plough and Tamasha production
Come To Where I’m From: London

Since 2010, Paines Plough’s nationwide project Come To Where I’m From has seen more than 100 playwrights across the UK perform pieces in and about the places which have shaped them. From 6 – 12 June Paines Plough will partner with new writing theatre company Tamasha to present Come To Where I’m From: London in which writers from across London will perform plays about their area in a series of live events across the city. The full programme of playwrights and participating venues will be announced in due course.