Review of: If I Were Me at the Soho Theatre

An identity comedy that seems to be having its own identity crisis - extremely comic and well produced but with a lack of actual storyline to give the performance meaning.

Billed as an ‘identity comedy’, If I Were Me is part of Soho Rising, a programme of up and coming talent showcased at the Soho Theatre this Spring. The latest play from award winning theatre and film company Antler, their collaborative and devised method of creating performance shines through this playful piece, throwing jokes (as well as tennis balls) at the audience at breakneck speed. Yet, for a plot that revolves around the identity crisis of main protagonist Phillip, If I Were Me seems to be suffering from its own lack of identity: unexplained characters with no back story appear and are never granted resolution, a lack of clear narrative development results in characters being unpredictable, and seemingly undergoing huge emotional changes off stage. As Phillip becomes less sure of himself, the audience becomes less sure of why things are happening, and whilst I can hope that this is an extremely clever and double layered intention, the result is too chaotic and surreal for a character arc to survive. 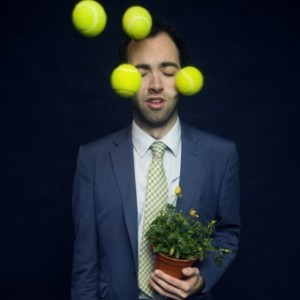 Starting with a situation that is bound to make any millenial cringe, Antler shrewdly lands on one of the pinnacles of the modern identity crisis in the very first scene – the recording of your answerphone message. Everyone knows the archaic horror – do you go for a casual ‘hi’? The super laid back ‘you know what to do’ that might risk offending your boss? And why do you always completely forget how to speak as soon as you hit record? Introducing us seamlessly to Phillip, our identity challenged protagonist, this sweet little taste of relatable comedy sets a high comic standard for the rest of the piece.

The comedy genius of the Antler company can’t be faulted; Nasi Voutsas’ sense of timing and emotional expressiveness pushes his character Phillip into the hearts of the audience from the very beginning. As a wonderful foil, Daniel Foxsmith does a convincing love-to-hate portrayal of motivational speaker Trevor, but excels most as Phillip’s Boss, a corporate creative archetype that gets the biggest laughs. Frequent corporate conspirator Daniela gets the most range out of her characters, effortlessly bringing to life another nightmare boss, a multi-layered love interest and an incredibly nuanced and honed Spanish impression.

The drab corporate world, with it’s weekly compulsory conferences and endless post-its, is a clever choice of setting – we are both familiar enough with it to get all of the in jokes, and hate it so much that a real pathos develops with Phillip, who finds himself increasingly lost in a sea of suits. Unfortunately, the audience are increasingly lost as well. Whilst the fourth principle cast member Merce Rilbot is a wonderful physical performer, who excels at portraying the vulnerability of her character, she is ultimately let down by the fact that her character is never explained – with no name, she could be a figment of Phillip’s imagination, or given that she interacts with the other cast members, a psychologically questionable but real character.

This ambiguity is symptomatic of the wider lack of direction of the piece – Phillip’s social position amongst his colleague keeps shifting, but for increasingly unclear reasons, and on the whole the play feels more like a series of very high quality sketch scenes strung together with too little story line to maintain continuity. In testament to the quality of the actors and the writing, it was often so funny that I didn’t really mind the narrative, but in the longer term it limits the success of an otherwise wonderful piece. I needed a few more narrative markers to tell me exactly what was happening – or as a departing audience member said ‘I really didn’t understand what was going on – but I didn’t care!’

If I Were Me will be continuing its run at the Soho Theatre until Saturday 26th March, with shows at 7pm on Friday and Saturday. You can book your tickets from the Box Office on 0207 478 0100, or from their website