Review of: I Am Not Myself These Days

An incredibly one person show from Tom Stuart and Fuel Theatre, I Am Not Myself These Days is not to be missed.

In retrospect, I Am Not Myself These Days is a fantastically pertinent, almost tragic title for Josh Kilmer-Purcel’s autobiography. Here produced as a one-person show adapted by and starring Tom Stuart, what is most strikingly apparent is how suitable the text is for the stage – Kilmer-Purcell’s life and the existence of his drag act counterpart Aqua is rendered intimate, vibrant, brimming with intensity yet always incredibly humane.

Kilmer-Purcell’s life is an emotionally charged one – the drag artist, freshly arrived in New York, is utterly infatuated with the coke-abusing, addict-housing prostitute Jack, a masculine figure characterised by Stuart’s asides and rapid drop in vocal pitch. It’s an alarmingly powerful effect – both Kilmer-Purcel and Jack inhabit the one body, both with characteristic complexity. Kilmer-Purcel’s love of their boyfriend is entirely intrinsic – they exist within the same body. As the show progresses, Aqua and Jack’s relationship goes from exuberance to disillusionment, becoming violent, turbulent, stunning.

There was a plethora of fantastic directorial choices from veteran Nick Bagnall. Usually committing himself to larger ensemble pieces, particularly Shakespeare, Bagnall is here allowed to flex his creative freedom on material that feels far more personal and intensely emotional. A desk fan is placed on a filing cabinet, and all of a sudden Aqua is driving down the streets of New York on the back of a motorcycle – escapism and youthful abandonment fabricated through mundanity. Aqua’s drag costume, decked with two fish-bearing glass breasts, were equally superb. In moments of rage the water in the breast-fish-tanks became torrents of anger, sloshing around vigorously before calming again as composure is restored. It was a subtle yet sophisticated decision.

One of the most enticing and exciting elements of the show has to be the set from designer Ti Green. Choice lighting decisions and a perfectly placed frame divide the stage into two triangles of equal size, illuminated by naked bulbs lining the stage. The frame is incredibly apt – the stage seems to have a giant mirror running down the middle, reflecting a number of different things: the relationship between hope and reality, love and infatuation, or even the two aspects of Kilmer-Purcel’s identity, be it as the wild and youthful Aqua, or the bassoon-playing, sensible Josh that emerges at key points of the play. This axiomatic contrast in character was present but never overly done, and Tom Stuart’s text was suitably embellished to reflect the complexities of the gender relationships within drag acts. 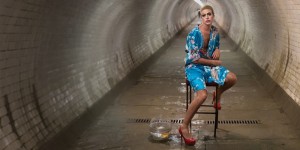 There was something incredibly Joycean about the piece. Whilst the frame may have existed as a mirror, it was also a frame in the portrait of a drag artist as a young person. Aqua’s New York, just like Joyce’s Dublin, was a character in its own right. Garish pink and blue neon LEDs lined the walls, flashing and disturbing the audience. The audience were thrown from penthouse, to club, to metropolitan street with each passing second, inhabiting a world stocked with eccentric and flamboyant characters, each vivified by Stuart in what the press release describes as a ‘tour-de-force’.

Certainly Stuart has to be applauded, and whilst there was a force behind his character, it never felt overbearing. One-person shows can become emotionally draining experiences, but what Stuart accomplishes is a humoured and natural engagement with audiences. The emotional resonance of the play lay in its humanity – Aqua was an incredibly naive person who, through intense experience, emerged transformed. The text itself was full of lyricism and enchanting lines ‘I’m used to blackouts…I don’t know who I’ll wake up as’, and Stuart’s delivery of the single name ‘Jack’ seemed to have the same impact as a besotted Kate Winslet character trying to stop Leonardo diCaprio from drowning in the freezing cold Atlantic. Stuart’s change in physicality, from the assuredly feminine stance of Aqua through to the hunched Jack, were all pulled off with aplomb, and the magic never broke as the performance continued.

The decision to add lip-synced songs throughout the performance was equally successful – as Aqua transformed as a character so too did the tone and timbre of these renditions, ending with a final play of N-Trance’s Set You Free embellished with bitter irony – rather than liberate her, love has instead inhibited and confined Aqua to a single, drug-addled penthouse. 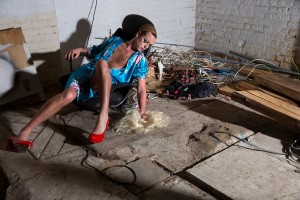 But why is Kilmer-Purcel Not Himself These Days? The tragedy of the autobiography and Kilmer-Purcel’s life lies ultimately in the fact that Aqua existed only temporarily – her mortality defined only by her audiences. As the performance closed so too did her life, passing from life to death with the speed of a goldfish, as she herself put it. She existed, by the end of the show, merely as a deposited pair of stilettos and blonde wig next to the performer. The text took on a metatheatrical significance – Aqua had only ever existed in the imagination of Josh Kilmer-Purcel, but, for that brief hour, she was there in the imaginations of the audience too, spreading love, joy and entertainment. An unmissable accomplishment all round.

Written and performed by Tom Stuart

Adapted from the autobiography by Josh Kilmer-Purcell