Review of: Every One at the Battersea Arts Centre

Produced by:
Chris Goode and Company

A stunning, heartbreaking piece of theatre which doesn't lose any of its power despite a rough conclusion 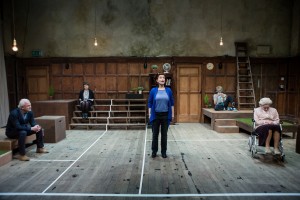 Jo Clifford’s acclaimed text receives its English premiere at the Battersea Arts Centre this March. It could not have been given a better performance for the occasion – this is a work of immense power, and even if the ending has less of an impact than the meticulously structured first two-thirds of the show, the poignancy carries over. Every One is ostensibly a response to the medieval Everyman, and it could not feel more relevant in the most nihilistic sense imaginable. Here is the death of the world, imagined in the death of one woman. This work ranges from despair to sublimity and carries a dark power.

The story starts off very Brechtian, and elements of audience awareness was seen throughout the play – for example, the play opens with one character letting another speak first since it is her play, and later a character enters from the audience and asks another to help them into the world of the stage. Direct audience address features heavily. These techniques expose the characters (and actors) in all their vulnerability directly to the audience; neither party has anywhere to hide. This only heightens the depressive depths of the tragedy, as – in a convergence of ordinary family life and extraordinary events – a mother dies of a sudden heart attack, leaving her family to wonder and Death to explain. When not breaking the fourth wall, all performances are heartbreakingly real. 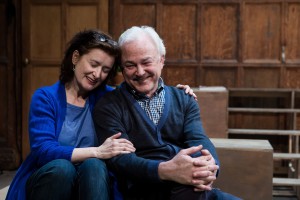 The cast were universally flawless – each actor striking the delicate balance between realism and distance needed for this work. The set was simple, giving the characters nothing to hide behind as they spent the whole show on stage. And the script laid bare the absurdist desperation of every one: the wife begging for purpose and another shot at life, the husband loving life through Latin verbs, the children seeking purpose in their passions and pastimes, the grandmother haunted by her dead husband’s wartime memories, and Death itself – charisma masking his knowledge of the futility of every human’s struggle against the end of time – global warming, war, and prejudice. Such a huge, raw piece should not work, but its grandiose nature is not a flaw: instead, it hits home, and it is hard to stop the tears.

I desperately wanted to give this show a five star review – the emotional power of this piece was astounding – but the slightly rough pacing and tone towards the ending slightly took the audience out of the poignancy. While the ‘Dance of Death’ was exquisitely choreographed, the fact that it was positioned around Death’s only loud (angry?) outburst seemed out of place – or perhaps it was purely the outburst from such a jovial character. Seeing another side to the shadowy figure may have played well had it not been so jarring. On the whole, however, this is a very minor fault of a magnificent play, and it would not tarnish any recommendation of it. Every One is a phenomenal work carried by a strong cast, and it is one of the most memorable pieces of recent memory.

Performances at the Battersea Arts Centre are at 7:30pm. The show runs until 19th March. Admission is £12 until the 5th and then £15 (£12 concession) until the end of the run. There is a BSL interpreted performance on 18th March.