Review of: Cyrano de Bergerac at the Southwark Playhouse

Cyrano de Bergerac, with amicable and engaging directorial and casting choices, is a charming replication of a classic text.

The transformative nature of the Southwark Playhouse continues to astound. Having personally last seen it as a hectic medieval tavern, to now see the world of 17th century France is understatedly evoked with ease was a delightful experience.  Truly one of the most versatile spaces in the capital, Southwark provides a perfect venue for Cyrano de Bergerac, Glyn Maxwell’s 2013 adaptation of Edmond Rostand’s classic french text. And this new translation certainly starts out charmingly well – a convent of nuns greet you as you enter, producing madelines and phatic chatter to settle the audience into the performance and its 17th Century setting. Though they aren’t the first all-female company to do this, the amicable atmosphere that comes with this means of demarcating the dramatic space was wholly refreshing. 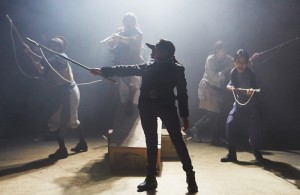 For those unfamiliar with Rostand’s work, the story is a typically neo-romantic five act narrative, here, in a metatheatrical twist, reproduced by the aforementioned convent of nuns  – boy sees girl from afar in Paris, they fall in love (also from afar), girl asks cousin (who is the boy’s new C.O and also besotted with the girl (his second cousin, mind) to find the boy, cousin woos girl through the boy (his cadet) by writing her poems and love letters until the hectic collision of court politics, Spanish wars and Gascoigne identity lets the performance clatter towards a bittersweet ending.

Kathryn Hunter as the titular poet solider Cyrano was a casting choice of divine quality – her near-abstract physicality seeming almost puppet-esque, every movement and power stance creating a jauntily vivacious figure. It is sustained with panache, Hunter’s Cyrano (with his comically large nose) exists as a walking paradox – jaunting and awkwardly posed, yet oozing wonderful imagery and beautiful sentences in the wooing of his cousin. Though the company (including Game of Thrones‘ Ellie Kendrick as the cadet, Christian) functioned well, this was Hunter’s show and she seized the opportunity energetically – bounding across the stage, never still for a single second.

Some fantastic directorial choices from Russell Bolam have to be commended, alongside aspects of Glyn Maxwell’s script. The metatheatrical, almost Brechtian, structural choices , with the convent dwellers conjuring up this story, worked well – whilst the nuns themselves were deeply theologically driven, the moment ‘the play’ started, crosses were put away and a more secular, morally dubious society emerged. Even the priest in Cyrano’s story was a foolish money lover. In Cyrano’s world, words are the new gospel – characters are are devoted to metaphor, to rhyme, rather than to the cross.  It was an amusing and stylistically creative choice, and one that was certainly played to its full strength. It was also a perfect tribute to Rostand himself – the playwright including a metatheatrical sequence in his text.

In spite of this, something didn’t quite connect with the translation. Rostand is famed for his evocative romanticism, an ingrained textual lyricism, yet here the lack of a verse form dispelled some of this wonder. As the farcical swashbuckling of the first few acts gave way to the more pensive, tragic endings, the emotional resonance of the piece just didn’t seem to connect in a way it seemed to. The play ended jarringly quickly with a slightly uneven tone, and perhaps more embellishment here could have given the actors more of a chance to  make more of this tragic resonance. At the same time, Cyrano’s climactic duel with 100 men at the end of the first act felt somewhat static as a physical sequence – Hunter simply surrounded by the ‘100’ men in a ring.

Translation can often suck the magic out of a text, leaving the narrative and characters with far less to work with than the original. In that respect, Cyrano de Bergerac is something of a disappointment. However, an electrifying central performance from Hunter and some amicable and engaging directorial and casting choices  make this a charming replication of a classic text.