Review of: Cosi fan tutte at the King's Head Theatre

Produced by:
The King's Head Theatre

Opera has returned to the King's Head Theatre and it does not disappoint. A perfect way to see an updated, well produced and performed version of a classic piece in a small auditorium.

All is right with the world. Small scale opera has returned to Islington – and, and the best news is, it is very good. Since OperaUpcClose ended their residency at the King’s Head Theatre last year there has been a void that needed to be filled, and thankfully the time has finally come a tremendous new production of Cosi Fan Tutte.

It is a great privilege for an audience of only 120 to watch an ensemble of just six performers and a pianist perform a top quality and original version of an old favourite. The proximity of the action and the accessibility of Martin Fitzpatrick’s translation helps to make this as understandable and entertaining a Cosi as I have seen. Setting the action as part of a reality game show is inspired. The use of close circuit TV to demonstrate the action off stage effectively puts the audience into the role of the missing chorus, and making Don Alfonso an oily game show host is a seamless transition, with Steven East superb in the role. With the action so close, we really do feel like co-conspirators in his manipulation of the two male dupes, Ferrando and Guglielmo, who are persuaded to pretend to leave their lovers to come back and seduce them in disguise. This might feel uncomfortable given the reality format, but for the perfectly played gullibility. 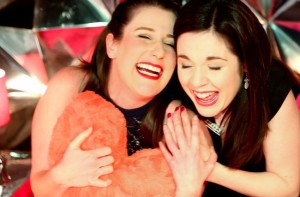 The role of Despina, the knowing and ultimately controlling servant, is transformed here to that of TV show Floor Manager. This loses nothing of her ability to exact the solution to Alfonso’s schemes, and the role seems ideally suited to Caroline Kennedy. The scenes in which the duped young men return disguised as previous game show winners (rather than Albanians as written in the 18th Century) trying to seduce each other’s loves are played for laughs, but this takes nothing from the opera’s underlying themes and there is no shortage of pathos. Perhaps the most impressive role of putting in a pared down production like this is that of the Musical Director; Elspeth Wilkes piano is a more than adequate substitute for a full orchestra.

The King’s Head is alternating the opera with a play about the staging of the opera, written by Louis Nowra, set in a mental institution, and both continue until 2nd and 3rd April. Getting a ticket may not be easy, but it is certainly worth the effort. Let’s hope this is the start of a new series of operas at the King’s Head.