BU21 is a deeply unsettling and entirely bold new production - and in its own way entirely unmissable at Theatre503.

Watching BU21 at Theatre503 the same day as a terrorist attack on the continent was indeed a surreal experience. The show, dedicated to exhaustively and exhaustingly scrutinise the nature of grief and survival after such catastrophes, has undoubtedly been somewhat transformed by these fresh and haunting set of new circumstances – the pertinence and gripping commentary that may have come before can now be seen in a much rawer capacity. In a nutshell, the BU21 that was showing last week is not the same one being shown now.
The premise of the show is brutally frank – a passenger plane, travelling from New York to London, is shot down in a British-based terrorist attack. The plane, split in two, decimates a greater chunk of Fulham, leaving hundreds dead and thousands left to deal with the consequences. We as an audience are presented with six of these survivors, each embroiled in the events of the BU21 crash and attempting to deal with it in their own ways. The premise may sound somewhat like one of the Eight monologues from Laura Wade’s much performed play, but here it is harsher, more cutting, more cynical.

It is about twenty minutes into the play that Stuart Slade, a regular name at Theatre503 brings out his masterstroke – the character of Alex, a cynical, financially successful and entirely unlikeable man. Alex, played in a show-stealing turn from Alex Foryth, forms a brutal metanarrative for the show, commenting not only on his own experiences (his best friend and girlfriend were killed during the crash – mid coitus) but also on the general ideas and themes running through the performances. Our scruples become his scruples; he mocks not only the performance but audience expectations, and even as we are toyed with we lap up the laughter and exhilaratingly un-PC comments he produces. Breaking the fourth wall with such shameless force is a huge gamble for Slade but it pays off, and BU21 emerges as a masterful demonstration and dissection of how societies and individuals respond to these attacks and how they cope with the difficulties of simply living on. 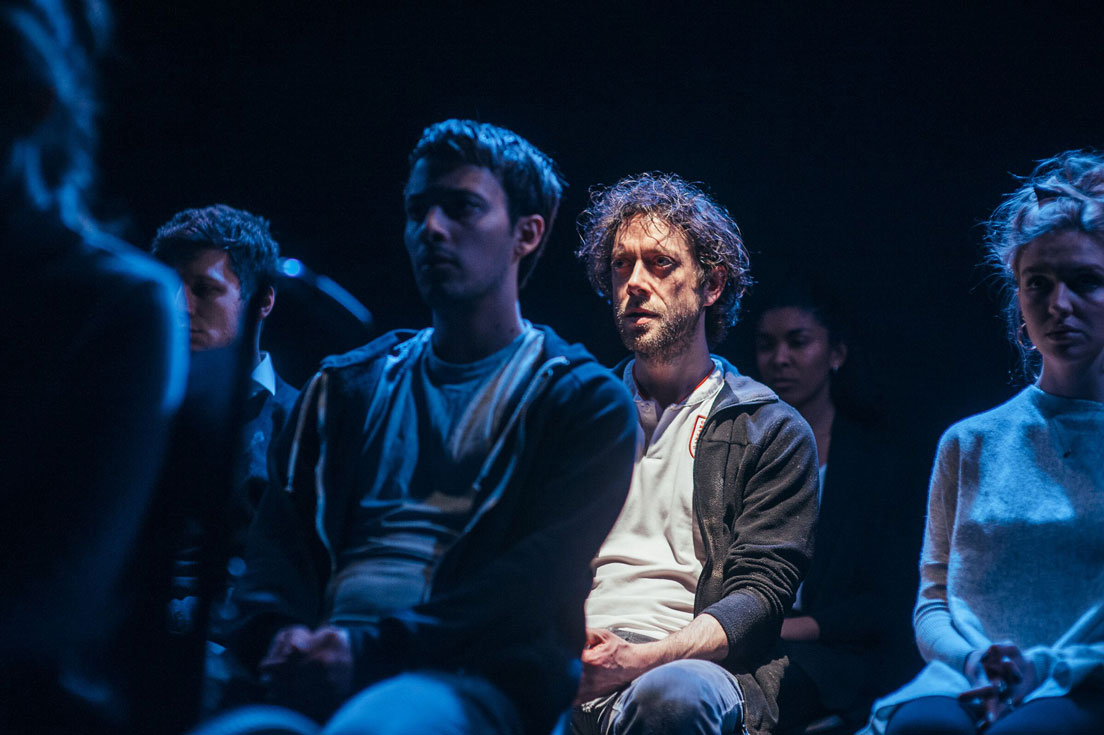 This is largely played out in the capacity of a support group – a well worn trope but one that simply serves as a convenient vehicle for allowing these characters the chance to be frank and honest, as well as performative in their own way. Each of the six cast members performs with intense believability, and the events of the plane crash become startlingly real. Each of the characters has their own narrative, which, though interwoven with the others, act in their own ways to reach often contradictory conclusions. The irksome problem here was that certain stories overshadowed the rest of the narrative – Thalissa, played with a fantastically sympathetic warmth by Thalissa Teixeira, becomes something of a butt to Alex’s jokes, she falling madly in love with him whilst he remains largely apathetic to her. But even in its own way this worked – without Alex’s metacommentary on her life Thalissa would have been a defiant, important woman – it is Slade’s ability to warp our expectations and subvert what would be perceived as a ‘normal’ character that really shines through. This is a piece of writing that seems to relish being trapped in a number of knots, each harder to loosen than the last.

The Theatre503 set was minimalistically ideal, cement dust lining the side of the stage and partially burying an old Mickey Mouse toy. It was the centre of a blasted environment, which each of the survivors essentially inhabited the ruins of lopsided fluorescent bulbs and the cursory plastic cup.

Reviewers often state that plays ask more questions than they answer, and whilst this is invariably true, what BU21 settles upon is a frank statement to its audiences – these attacks do not necessarily make you ‘stronger’ or ‘more united’. Individuals have individual reactions, and this fact, rather than the formation of a cohesive ‘survivor’s narrative’, should be remembered. It can go from intensely funny to intensely pensive in the blink of an eye, and for that should be remembered.

As a play reacting to the events of 7/7, or even more recently in Paris and Ankara, Theatre503’s BU21 is uncompromisingly frank about the questions it asks. On the same day as a terrorist attack, these questions seem raw, almost disconcertingly impertinent in a time of intense grief. But this does not stop the play from being a masterful commentary, and one that should be experienced if at all possible.

BU21 will be playing until the 9th April.