Produced by:
United Agents and The Pleasance in association with Soho Theatre

Audience participation is an art. I have seen highly successful performances where the audience were gently coaxed into participation, with clear (if unstated) rules creating a safe atmosphere where one cannot fail. Adam Riches, on the other hand, pushes his show Adam Riches is Coach Coach full throttle in the opposite direction with exhilarating results. ‘Volfsball’ might have rules, but good luck trying to understand them. 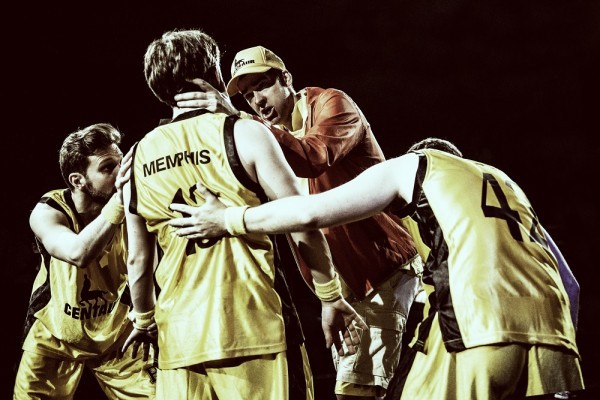 The show sees Riches as the eponymous Coach Coach bully, cajole and examine the nipples of the audience in an hour-long interactive theatrical comedy playing homage to 80’s High School movies – to the extent that Teen Wolf himself features as a member of the team.

Riches is amply supported by a team of young comic talent, many of them stars of last year’s Fringe, including Richard Gadd as a office chair-bound principal. A particular highlight is Stevie Martin as Mrs Coach, sporting a Volfsball as a pregnant stomach and admirably holding her own against Riches – although her voice seemed to be showing the strain.

The choice of subject doesn’t just give the show a rich cultural cache of referential wisecracks, however. Instead, the live performance of sport is exploited for all its comic potential, and imbues an already heavily-improvised show with a genuine unpredictability. With six performers (including the mannequin playing “Yet To Be Cast” and another cast member with two left arms) attempting to throw the pink Volfsball into the onstage hoop, the narrative structure of the show itself is at stake. Taking his team aside mid-game, Coach Coach observes “that last bit of narrative progression didn’t exactly go to plan.” This is spontaneity on steroids.

And here lies the genius of the show. With this spontaneity comes a suspense that miraculously transforms the Soho Theatre into a raucous sports arena. When Riches’ team (genuinely terrible at Volfsball) finally manages to score, it provokes a euphoric roar from the pennant-waving audience. Measured in terms of willingness of audience reaction, this is a show like none other. The participatory element and the suspense of the spontaneous find their apex in the show’s climax, which I won’t spoil here – but unless you want to hold the future of Volfsball in your hands I would recommend avoiding any seats in the centre of the front row.

(It turns out that Volfsball is in fact a real sport, and not invented by Riches as I had assumed. According to volfsball.com, Riches’ version “has a different sized ball and resembles something more like basketball, but nonetheless is still a three aside game called Volfsball.” The same website claims that aliens invented Volfsball.)