OperaUpClose's children's opera which, while a great way to introduce opera to kids, needs a bit more tweaking to fulfill it's full potential

Opera is arguably not a theatrical style which is particularly well-known or well-loved in modern society, so seeing the award-winning OperaUpClose create a performance geared towards children is a welcome change. The future of opera lies in its ability to attract the younger generation, so designing a piece especially for them is a brilliantly laud-worthy feat and one that should be more encouraged. 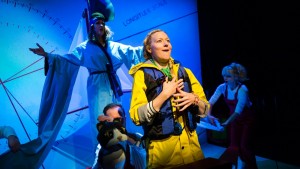 The opera itself deals with a modernised version of the Odyssey-myth, with a young girl Ulla attempting to be the youngest ever to sail around the seven seas. The music itself was extremely well-thought out and constructed, I was especially pleased to realise that the fact this was a ‘children’s opera’ didn’t lead to much simplification of the music style. The chords were beautiful, spooky and delivered with aplomb by an intensely talented cast dressed in bright red dungarees – not dumbing-down the operatic style for the kids but instead challenging them to a new way of story-telling, and one that held the young ones’ attentions for the full hour of the show.

However, while the music and delivery was amazing, the staging suffered quite considerably from not using the space to the singers’ advantage. Potentially used to a smaller stage, Ulla herself was crammed in at the very front of a makeshift ‘ship’, doomed to standing almost completely still for the first twenty minutes of the show and completely ignoring the swathes of space that existed SR and SL. This was a reoccurring theme throughout – Cy-Ops stayed rather still SL singing at Ulla for a good 10 minutes before leaving his safe haven, and all the fantastical characters had to stay standing on a box throughout their time on stage. Children’s shows have to be energetic, quick and pulsing in order to capture a young audience, and sadly Ulla’s Odyssey didn’t quite deliver this. I would argue that this is something opera struggles with generally, the music and singing coming leagues before blocking and rhythm of the show. It is therefore rather sad that an opera like this, attempting to appeal to a new, younger generation of theatre-goer falls into the same trap; I would have liked to see far more ingenuity with the whirlpool, the various storms, the unleashing of the four winds… OperaUpClose have chosen such a fantastic myth with so much scope for some really exciting and breath-taking theatre, but they seemed to have struggled actually realising this potential onstage.

This is not to say I didn’t enjoy the production, but in order to challenge the idea of grown-up very ‘upper class’ opera it is sadly not enough to have singers onstage in red dungarees singing about being caught in a storm, we have to see this storm and feel this fear with them, which is ultimately what the production lacked. While it was a great way to introduce opera to kids, the show may need turning up a notch in order to utterly enthrall them.