Review of: The Patriotic Traitor

Jonathan Lynn's new play about the unlikely friendship between Charles de Gaulle and Philippe Pétain contains some thought-provoking themes, but suffers from an uneven tone and is a shade too long.

Charles de Gaulle and Philippe Pétain – two names indelibly associated with France. One is remembered as the fearless, uncompromising leader who gave a nation the strength to stand tall again after the humiliation of Nazi occupancy, the other as a shameful collaborator who besmirched his military glory in pursuit of personal power. 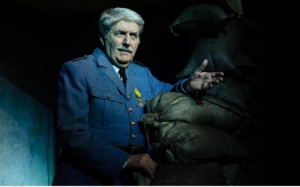 Jonathan Lynn’s The Patriotic Traitor traces the pair’s curious father-son relationship, from its first spark upon a Parisian parade ground before the First World War, to its last flicker during Pétain’s trial for treason in 1945. It is a compelling story with a pertinent question about national identity at its heart, but Lynn’s production – he directs as well as writes – is also self-indulgent, shifting tonally throughout and overstaying its welcome by a good 20 minutes.

Tom Conti and Laurence Fox – two almost household names – star as Pétain and de Gaulle. The former shuffles unassumingly around the stage as the elderly Pétain, seldom shedding his gruff demeanor yet finding an uncle-like kindliness as well. The latter, in contrast, strides purposefully, straight-backed and stern in a manner befitting his lofty principles. There is unmistakably something of Benedict Cumberbatch’s Sherlock in his arrogance, his dismissive intellectualism and his supreme social awkwardness. Both Conti’s Pétain and Fox’s de Gaulle are perpetual outsiders in entirely different ways, but an unlikely chemistry exists between them, artfully confirmed in a delectable scene in which they drunkenly slur Nietzsche at each other.

Lynn’s production gets a lot right. Georgia Lowe’s unfussy, versatile set is elegantly lit by Mark Howland. As the action progresses through both world wars at whirlwind pace, French flags unfurl grandly against the backdrop – a large yellowing war-room map of Europe – only to be replaced by rich, red Nazi banners that scurry to the floor in turn. Lynn’s direction is similarly effective through its simplicity and understatement.

The story itself – told through the recollections of Pétain during his trial – is gradually developed through a host of fluid, short scenes. For the most part, Lynn’s writing has an unexpectedly dry humour to it, delivered well by the withering – and strangely Northern – Conti. Somertimes, however, the gravitas of events seems to force Lynn into a more sombre tone; it is, after all, difficult to write jokes about the battle of Verdun. This unceasing shift between light comedy and heavy drama takes its toll and there is a distinct lull in the second half.

The play’s denouement is also dry, though not in the comedic sense. Conti and Fox do well to hint at the underlying friendliness in their relationship that makes their eventual enmity so profound, but there is never any tangible sense of tragedy to Pétain’s fall. Lynn’s opposition of ideologies is fairly transparent throughout and the final scenes put into words much that could be left unsaid. Yvonne de Gaulle, Charles’ long-suffering wife astutely played by Ruth Gibson, is also criminally underwritten.

The Patriotic Traitor plays around with some important questions about national pride, and confronts the issue of collaboration – still so sensitive in France – head on. Such issues are underserved by Lynn’s play, however, which, although it features two praiseworthy performances from Conti and Fox, is still in need of a severe re-examination.

The Patriotic Traitor will be continuing its run at the Park Theatre until 19th March. You can book your tickets from 020 7870 6876 or https://www.parktheatre.co.uk/