Review of: The Devil Speaks True

Produced by:
Goat And Monkey

Not for the faint-hearted, this production exposes the harrowing reality of ex-soldiers living with PTSD, while providing one of the most intriguing and original interpretations of Shakespeare's MACBETH in recent years.

As I exited The Vaults into the crisp Thursday night air, I was trying to recover from a sensory onslaught. My breathing was rapid; my palms were sweaty; I could feel a sizeable lump in my throat. This was the impact of The Devil Speaks True, Goat and Monkey’s chilling contribution to this year’s VAULT Festival. Marketed as “Shakespeare’s Macbeth as told by Banquo”, the production frames segments of the classic text within the context of modern warfare. Using real-life accounts of three ex-soldiers, who detail their experiences of conflict and the psychological implications of returning home, Director Joel Scott attempts to attribute a PTSD narrative to Banquo after his battle against the rebellious Macdonwald and the Irish/Norwegian forces. The attempt is not only successful, but Scott managed to do what many believe to be impossible: to provide some seemingly fresh and intriguing insights in a heavily saturated market. 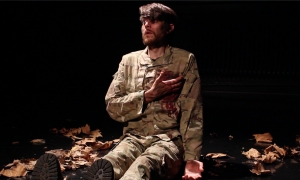 Upon entering the intimate and secluded space known as The Cage, audience members were provided with a pair of headphones and told that they would need to wear them throughout the performance. Despite the fact that the production would use live actors, technical effects and projections, the pre-recorded binaural audio was our only source of sound, not including the rumbling, surprisingly atmospheric noises of the traffic above.

Banquo, played in person by Neil Callaghan, often moved masterfully in tandem with the audio: during Banquo’s PTSD-induced seizures, his body pulsated grotesquely in perfect rhythm with sounds of laboured breathing and white noise, and when Banquo spoke (a pre-recorded, exceptional performance by Brian Lonsdale), Callaghan jerked his head as if he were speaking. Some may argue that the separation of sound and visuals in this manner is an overly-gratuitous exercise in theatrical experimentation, and they might have been right – were it not for Callaghan occasionally moving ever-so-slightly out of sync. Through our individual binaural experiences, the audience became Banquo – his mournful echoes were so close and so vivid, that the blur of diegetic and non-diegetic sound created by his crumbling psychosis became a personal affair. So when Callaghan missed a beat, was it merely a mistake on his part, or was it a carefully crafted moment that dealt a truly unnerving blow to our collective experience, binding us closer to Banquo? I have no idea, and I think that’s the beauty of it.

Other technical additions furthered this effect: thick clouds of suffocating, aromatic spray were used to induce a particular environment, such as the dank, earthy musk of the Scottish heath; wind machines were used to simulate the sensation of a combat helicopter landing; and smoke drifted eerily above Banquo’s head as he slept, a literal dark cloud hovering ominously above him. Much of this sensorial play was conducted in near or total darkness, and to an extent, this worked – by denying their sight, Leo Woolcock’s lighting design allowed the audience to sharpen their other senses. But after a while, the blackouts unfortunately became rather overused, and the repetitive nature of this technique removed some of the atmospheric tension that they had worked so hard to create.

The more compelling scenes emerged when Scott began to embellish sections of Shakespeare’s text, most notably when Macbeth and Lady Macbeth plot Duncan’s murder in Act I, Scene VII. As the two fiends deliberated the crime, Banquo was in the room above them, listening in on their conversation through the floor, and swiftly losing his grip on reality due to PTSD-induced hallucinations. Placing Macbeth within wartime contexts is certainly not a unique idea, but by focusing on the repercussions of conflict in regards to Banquo (an arguably neglected character in terms of varied theatrical and cinematic interpretation), and using this narrative to reinvent our perceptions of the original play, Goat and Monkey has established a relatively fresh and unique perspective for a text that is overloaded with unoriginal adaptations. The audio from interviews with real ex-soldiers (listed in the programme as Lance Corporal JG, PM and TS (MBE)) attached to these scenes, acted as a constant reminder that this production, although based upon Macbeth, was also firmly rooted in a painful and traumatising reality, and the effect is overwhelmingly heart-breaking.

Not a play for those of a nervous disposition, The Devil Speaks True encapsulates what can still be exciting about Macbeth, while exposing the difficulties our ex-soldiers face as they attempt to reintegrate into ‘normal’ life.

The Devil Speaks True is running as part of the VAULT Festival every day at 7.15pm until 27th February, with matinee performances on the 20th and 27th at 2.45pm, before embarking on a UK Tour. You can book your tickets from 0871 220 0260 or www.vaultfestival.com.