Red Velvet, Lolita Chakrabarti’s invigorating play about the nineteenth-century African-American actor Ira Aldridge, has taken a long time to make it to the West End. What started as an idea for a film back in 1998 finally came to life as a play at the Tricycle Theatre in 2012, where it returned to in 2014 before transferring to New York. Now, having finally made its way to the Garrick, Indhu Rubasingham’s vital, elegant production makes the perfect third act for Kenneth Branagh’s celebrated season. 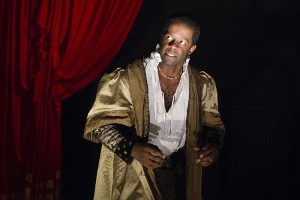 Whereas Branagh’s production of Terrence Rattigan’s Harlequinade allowed the audience to peek backstage at the hectic, hilarious antics of a touring Shakespeare company, Chakrabarti’s play lifts the curtain to reveal a much darker, sobering theatrical world. Adrian Lester’s gruff, ageing Aldridge sits in a dingy Russian dressing room, reminiscing about his big chance back in 1833 as Othello in London. Three decades are then swept away with a swift change of set, and the bare stage of the Garrick becomes the bare stage at Covent Garden in the early 1800s.

With his company unfortunately robbed of their mercurial lead, Pierre Laporte (Emun Elliot) turns to Aldridge to undertake the role of the Moor. Lester’s Aldridge arrives, no longer bitter with age but fresh and enthusiastic with ambition. His fellow actors greet him with a mixture of enthusiasm, confusion, and ill-disguised contempt, as much for his radical ‘domestic’ style as for the colour of his skin. Battle-lines are drawn, both on stage and off, as Aldridge’s sensational appearance causes a stir that threatens to close the theatre down.

Lester is simply magnetic. As the aged Aldridge, his shuffling gait and hacking coughs are imbued with a resigned fatigue, a better resentment of the world that has denied him success. As the young Aldridge, however, he brims with exuberance and wit. His endearing politeness and uncompromising vision draw one in, so that when the slings and arrows of outrageous fortune finally take their toll, the cracks in his noble facade are heart-breaking to behold. This is a commanding tragic performance of breath-taking intensity, which speaks volumes about Lester’s familiarity with the role.

He has excellent support in Elliot’s unapologetically French Laporte – a brow-mopping, wildly gesturing whirlwind of a man – and in Charlotte Lucas’s Ellen, a quick-witted fellow actor whose preconceptions are quietly shattered throughout. There is good work too from Mark Edel-Hunt, whose pompous, prejudiced Charles is simultaneously laughable and punchable, and from Alexander Cobb as the idealistic but cripplingly shy Henry.

Chakrabarti’s play is structurally exquisite, with two subtly reflective scenes featuring the old Aldridge bookending just a few delightfully developed ones featuring the young. Her dialogue pops with snappy, gentle humour at times, but is also littered with a set of engrossing speeches and biting arguments. One particular set-to in the second half between Aldridge and Laporte is a memorably vital piece of theatre.

If one were being pernickety, one might complain that Red Velvet is a touch too didactic at times, but that can be forgiven when there are such important lessons to be learned here anyway. Pertinent questions of artistic integrity and national attitude are unequivocally posed, with some more inflammatory lines drawing an audible intake of breath from the audience. Chakrabarti’s chilling conclusion is as much a challenge to the audience as anything else.

With Red Velvet, Branagh’s ‘Plays At The Garrick’ season seems to have matured into something truly significant. Rubasingham’s fine production and Lester’s magnificent performance are both extremely welcome additions.