Review of: Review: Poll Function at the Pleasance

Produced by:
Greg Shewring and The Project

Poll Function is a twenty-first century Anthem for Doomed Youth that has to be heard, but the show never felt like it hit all the right notes.

Poll Function at the Pleasance was, tonally, a very satisfying performance. Pitched somewhere between Larkin’s This Be The Verse and a particularly harrowing episode of some sort of angsty drama – its consistent nonconformism and representation of a youthful and profanity-laden apathy gave it a familiar, well-worn, and pertinent message. In spite of the hectic nature of the two leads played by Greg Shewring (also writer) and Jon Pascoe, the hour long show contains scenes of complete and unfiltered didacticism as it reflects on a millennial generation lost and unsatisfied with the world in which they find themselves. A voice for those who have seemingly lost the need to speak.

On a theoretical level Poll Function is onto something intriguing. The common saying is that comedy equals tragedy plus time, but here it is the other way around – the two leads, on an unspecified road trip to somewhere in the West Country, are haunted by their teenage days – full of youthful vigor and hope for the future. As they speed through the empty roads, they reminisce on old times, heartaches, betrayals, opportunities and musical fun. The constant and hectic jumps forward and back in time do well to highlight the contrast. These are men lost, resorting to literal nostalgia trips to attempt to find some form of satisfaction with their lives. They never really grew up because, as it turned out, there was nothing for them to grow into. 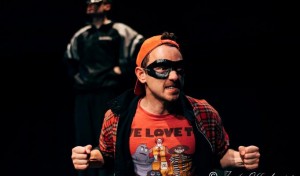 In spite of these theoretically and symbolic successes, Poll Function is found wanting on a structural level however. The show opens with an intensely hectic and flippant manner, characters pissing out of windows, smoking weed and having car-based grooves to Bhangra music. It felt like what Dick’n’Dom would have done in da bungalow had they been given a post-watershed billing. This tongue in cheek attitude was so overwhelmingly intoxicating that it undermined any attempts at emotional resonance; the two characters became clowns, and any attempt at sympathy came a bit too late. As Pascoe falls, sobbing, into a final monologue about how much he hated his mother for not loving him enough, it felt as though the emotional punches of the show came just too late.

Other elements were equally irksome – the show was trope-heavy (the weed smoking had to be accompanied by reggae music, just as the bhangra had to be that song you already recognise). Women, unfortunately, never get any meaningful presence in what was a masculine anxiety fest, the female sex used only for objectification or as sources of antagonism for the male leads. This was a twenty-first century Anthem for Doomed Youth, but the show never felt like it hit all the right notes.

Poll Function will be at the Pleasance until the 28th.