Review of: Macbeth: A Tale of Sound and Fury

Macbeth: A Tale of Sound and Fury is well worth the visit, and leaves you ready to subvert Shakespeare’s texts with the drop of a hat – for this 6Foot Stories must be commended.

Half way through 6Foot Stories’ performance of Macbeth: A Tale of Sound and Fury, one of Angelo Badalamenti’s songs from Twin Peaks (Freshly Squeezed, if memory serves) makes an unexpected albeit welcome appearance in the background of one of the scenes. Though it takes some gall to use such a soundtrack in a performance, such Lynchian music was, as it turned out, incredibly apt for this production of Macbeth, and if David Lynch were to ever tackle the Scottish play, it seems that he would do it in a very similar vein to what is currently being shown at the Hope Theatre in Highbury. Its mixture of occult, comedy, tragedy and hyperbole were entirely akin to something right up Lynch’s street. The unnerving disparity between gore and laughter that has typified many of Lynch’s works was certainly present on the night.

Indeed, 6Foot Stories achieved something rather fantastic with their adaptation of Macbeth, which, through a drastically cut down runtime and intriguingly bold reinterpretation of the text, avoided many of the gripes that surround current performances. The premise was new and invigorating – three fortune tellers (based in a scrapyard) retold the immortal classic in their own special way, swapping in and out of character as they desired. Shakespeare’s words and characters became nothing more than playthings as  parts were thrown between performers, and lines were redistributed on a whim. Though this may have risked becoming frenetic and overwhelming, the cast managed to orchestrate their Shakespearean chaos in a way that was riveting and energetic – the story flew by with refreshing speed.  A Tale of Sound and Fury was certainly an apt description for the performance – there were huge swathes of both throughout the 70 minute runtime. 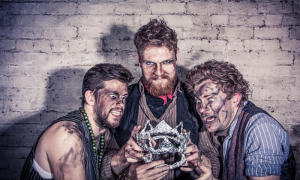 Structurally, the show limited itself perhaps with its casual regard for character. Throwing dialogue and roles between actors (each part created by a single item of clothing, be it a sash (Macbeth), a shawl (Lady Macbeth), or a crown (Duncan) etc) was certainly an accomplished feat by the cast, but in chopping and changing roles so frequently, the actors hampered  the character progressions so important to the show – Macbeth’s delusions of immortality for instance were not as pronounced as they needed to be. As the show progressed, this became more and more ludicrous – Macduff’s son a toy monkey, Lady Macduff simply a strip of cloth, each quickly dispatched by Macbeth’s crafty french assassin (in that scene depicted as a snake sock puppet). Again, the casual flippancy for creating character undermined the emotional resonance of these scenes, and the audience were often unsure as to whether or not a scene was comedic or tragic. The show started with a commitment to maintaining a balance between farce and tragedy, but fell perhaps too far into the former camp – while some audience members last consistently, others were perhaps slightly more bemused. Furthermore, often it was easy to mistake the three fortune tellers for the three weird sisters – or maybe they were the same people? It was hard to tell.

This was still a great and non-stop 70 minutes, with some fantastic directorial touches – Macbeth, after slaying Duncan, emerging with the daggers cradled against his chest, bloodied like a new-born babe. Macbeth’s crown made out of nothing more than tin-foil, exposed as worthless and meaningless; purely artificial in the realms of theatre. The textual condensation  and reinterpretation was done incredibly well, rivalling that of the likes of Smooth Faced Gentlemen in terms of maintaining the key themes of the play while omitting half the dialogue.  Macbeth: A Tale of Sound and Fury is well worth the visit, and leaves you ready to subvert Shakespeare’s texts with the drop of a hat – for this 6Foot Stories must be commended.