Light is a remarkable, nightmarish piece of theatre – while the plot may seem overdone, the staging is fascinating and innovative.

The Battersea Arts Centre’s black box theatre became a true black hole for Theatre Ad Infinitum’s production of Light. When the stage lighting was not in operation, nothing could be seen in the venue. The opening plunge into total darkness, combined with the flashes in and out of lighting throughout the piece, created a dizzyingly claustrophobic, mysterious atmosphere – ideal for exploring a surveillance state and their resistance. It was also ideal for jump scares from out of the darkness, suspenseful thrills, and grotesque shadows, all amplified by the lack of dialogue yet an ever-present musical score. This is the stuff of which nightmares are made. 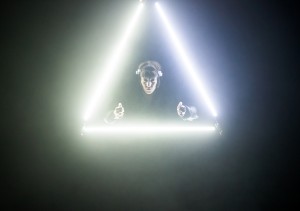 The plot was standard 1984-esque fare with added family drama; the protagonist Alex Dearden is the son of a dictator at the head of a regime which operates surveillance through people’s thoughts. However, rebel forces are operating to disconnect people from the mind-control technology, and Alex is sent off to bring in their leader and confront his past. However familiar the plot is, the way it is seamlessly communicated through the fast-paced action is faultless.

The lighting effects were the main draw of the show with good reason: masterful is the only word to describe them. They were entirely operated by the cast, either from on stage as props or from off stage as atmospheric, shadowy lighting for the figures on stage. The effect was quasi-cinematic; the performers could cut from scene to scene, from location to location, from time to time, using the darkness as a complete severance from one instance to the next. They used their silhouettes and shadows to create striking images which seemed larger than life. Most importantly, these artistic choices completely served the story, where Alex operates in a shadow world where he finds he cannot even trust his comrades.

The majority of performers trained at L’Ecole Jacques Lecoq, which was definitely noticeable in the piece’s style and each actor’s individual movements – sharply defined and fully embodied. Aside from Ben Thompson, who played Alex, the cast took on multiple roles each across the epic story they told. Even though costume changes were limited to accessories, changes in carriage and movement left no doubt as to whom they were playing.

The only technical elements not operated on stage were the score and the subtitles. The dialogue in Light was replaced by mimed interactions and the occasional words (in less clear or ‘national news’ situations) broadcast behind the stage. The score was a continuous mix of classical and electronic music; Bach and Britten blended with unearthly synthesised sounds, creating a hypnotic, sinister undertone to the old favourites.

Light is a remarkable, nightmarish piece of theatre – while the plot may seem overdone, the staging is fascinating and innovative. This is not one to miss.

Light runs until 13th February at the Battersea Arts Centre.  Tickets are £15, concessions £12.

Devised by the company