Review of: Land of Our Fathers

At its core, Land of Our Fathers shows a heart-wrenching portrait of the physical and mental disintegration of six men trapped down a mine shaft, beautifully showcasing the psychological effect isolation and hopelessness can engender.

‘Land of our Fathers’ has enjoyed considerable success in London before touring to the North Wall Theatre in Oxford, and it is easy to see why. At its core, it shows a heart-wrenching portrait of the physical and mental disintegration of six men trapped down a mine shaft, beautifully showcasing the psychological effect isolation and hopelessness can engender. 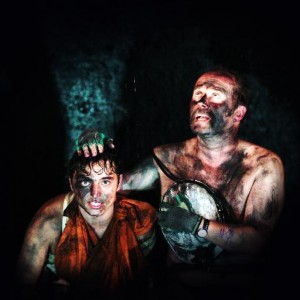 The first noticeable element of the show is the quiet beauty of the set – the placement of wall practical lights that flickered on and off in time to the beat of the scene changes was an inspired choice, as was the bravery to turn all light sources off at certain points during the show to subject the audience to the same claustrophobic darkness the miners were experiencing. These dark moments were some of the highlights of the play, where the experience of the miners and the experience of the audience collided, making it more than a simple end-on production with the audience peeking voyeuristically through the fourth wall.

The hymn sung at the start of the play was another fantastic concept, letting the audience see the miners placed in a functioning society before their journey down the mines and thereby creating an even greater contrast between this starting moment and the ending moment of the piece – the miners singing the same hymn, crouched shivering in their underwear, facing imminent death by drowning trapped 1000 feet underground. However, the ‘explosion’ when the mine shaft caved in, despite being the event that inspires the happenings of the entire play, seemed to lack a lot of presence – it felt slightly like the team wanted to get it over and done with in order to get to the main ‘point’ of the show, which is analysing the characters once trapped in this hopeless situation.

Sadly, this attitude was one that appeared quite a number of times in the first half. It was so obvious that the second act of the play was one which actors and playwright felt more comfortable with (which admittedly resulted in a truly spectacular second half, one that completely deserves the rave reviews it has been getting so far). However, at certain points Act 1 felt like it was merely there to set up for the emotional explosion that was the latter part of the show, especially the case in the Act 1 argument between Bomber and Chopper. There were certain things which had to be mentioned at the beginning in order to create the atmosphere in the second, and these weren’t quite subtle enough – there was a strong sense of certain lines being said in order to set up later conflicts, which neither script nor actors could quite hide

However, having said this, I must admit that vast majority of the acting was, nonetheless, completely and absolutely phenomenal. What was slightly unbelievable about the sections mentioned above was more than made up in the scenes seeing all six miners interact, which was the utter highlight of the play. Finding and training a cast to have the kind of chemistry that was visible onstage is no mean feat, and completely transformative in any scene which involved 3 or more of the actors. This play fed off the talent and the friendships present in the cast, every actor responding and interacting with everyone else in a manner that was truly spectacular to see. It is perhaps for this reason that the first act wasn’t as impactful as the second; a lot of the scenes only required a smaller number of actors, meaning the group spirit wasn’t as forcefully present.

All in all, this was an astounding piece of theatre. While the first act did need a bit more work, it is impossible to ignore the fact that we were sat in an auditorium watching six men attempting to cope with their impending deaths and, more than this, felt like we shared every emotion with them. It is very unusual being faced with an easily-cliched ‘life and death’ situation and yet feeling like we can understand the positions and fears of every single man onstage. This is completely down to what is a stunning script and incredibly intelligent, fearless acting, and the reason why I feel Land of our Fathers will hold the imagination of that Tuesday night audience for many weeks to come.

‘Land of Our Fathers’ has been on tour from the 20th October and will carry on until the 5th of March. Tickets are available from https://theatre503.com/whats-on/7384-2/