Jeramee, Hartleby and Oooglemore stands as a fantastic accomplishment: adults and children alike laughing resoundingly for the full fifty minutes. A treat at The Unicorn for all ages.

The phrase ‘magic of theatre’ is one thrown around frequently by thespians and reviewers alike. With theatre supposedly comes a conjuring, a box of tricks or a rabbit pulled from a hat. But as Jeramee, Hartleby and Oooglemore demonstrates, if there is magic to be found in theatre, it lies not in technical wizardry, but instead in the simplicity and physicality of performance in its own right.

Sometimes it takes a near-complete absence of comprehensible language to understand this. Set on a sloping beach front (the audience resting somewhere in the shallows), the cast of Jeramee, Hartleby and Oooglemore are restricted to saying their three titular words; using them infrequently and only when necessary. As a result, the vast majority of the performance happens in a comfortable and near total silence; the whole show resting on the physical comedy of its actors. The plot remains reassuringly simple: a day on the shore shared between two supposed siblings, (Hartleby and Oooglemore, played by Amalia Vitale and Fionn Gill), and their paternal figure Jeramee (Dorian Simpson). What emerges is 50 minutes of a quaint and charming performance. 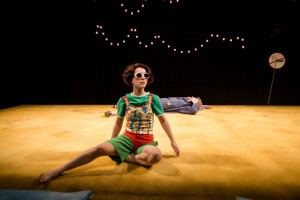 This absence of linguistics is the sort of flourish expected from a show directed by Tim Crouch, but what is quickly apparent was that whilst the actors only have three words to use, it always feels like they are saying exactly what was they need. A removal of language augments the quality of the show, and places the onus on the actors themselves rather than what they are saying. As the trio move through a series of relatable sequences (Hartleby gets dressed, Oooglemore loses his beach ball, Jeramee gets frustrated trying to set up his deck chair), it’s clear that there is no need for language: the audience, especially the rows of younger children present, were more than ready to use their imaginations to fill in the gaps and construct the meaning of the words for themselves. If a character says the word ‘Ooglemore’, the context and nature of the delivery are more than enough to make that word comprehensible. The indefinable becomes easily applicable. It is the sort of linguistic interrogation expected by the likes of philosophers like Saussure or artists like Magritte, but here played out in a children’s theatre, on a beach, with a brightly coloured beach ball. The talents of writer Gary Owen, freshly lauded for his Iphigenia in Splott,  are seemingly endless.

Praise must be given to the lighting design from Phil Bentley, subtly transforming as the tone of the show progressed. Lily Arnold’s costume design was a marvellous cavalcade of clashing colours, splendidly suited to the near-clownish nature of the performers. Amalia Vitale’s Hartleby deserves singling out for her entrance and opening few minutes, introducing the audience to both her character and linguistic parameters of the show. The whole performance rested on the success of those first moments. Later on, her and Gill’s fake sparring match provides a centrepiece for the whole show – oral and physical synchronisation provided a mesmerising and entirely fake game of basketball. It was a wonderful sequence to round off the show. The magic of this show rested not on what was present, but entirely on what was not, be it coherent language or a basketball. Crouch, after his successes with I,Shakespeare, has once again made theatre readily accessible to children.

There are, of course, some quibbles; Oooglemore’s decision to urinate in the sea (in the midst of the audience, no less) seemed oddly out of place, whilst the storm sequence felt underwhelming: the actors standing by as a parasol floated away. Given their talents for physical theatre, it felt a lot more could be done at this point to show the full intensity of this blustering gale.

In spite of this, Jeramee, Hartleby and Oooglemore stands as a fantastic accomplishment: though aimed at those between 3 and 7 years, adults and children alike were laughing resoundingly for the full fifty minutes(the fact there have been ‘adult’ performances added on the 23rd February and the 9th March is telling). A treat at The Unicorn for all ages.