Review of: Four Play at Theatre503

Four Play is a slick parable for the romantic endeavours of a white middle-class gay man.

When first entering Theatre503, it feels almost as if one has stepped into a small branch of Hollister. Blinking blue light softly illuminates a wood-panelled stage, and, when the actors first emerge, it is even to the sound of the sort of songs you’d find in the store – Enya remixes have never been more fashionable. The actors themselves continue this high-street chic aesthetic, one of the characters, Michael, even wearing what looks remarkably like a jumper from the David Beckham H&M collection. It is a fitting visual and tonal choice – Four Play is slick, clean, and trendy.

This is a shame, because it means the show feels somewhat safe. The plot is certainly intriguing – two homosexual couples coping with issues of commitment and entanglement in the messy world of modern relationships. What the play becomes is a parable for the romantic endeavours of a white middle-class gay man. Do open relationships work? What is the solution when you and your partner both have fears about commitment? These are human and relevant questions and on the whole dealt with methodologically and systematically, though with a degree of empathy thrown into the mix. 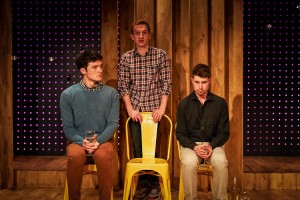 With the onus on these four, the script does away quite considerably with other questions – women, for example, are rendered into LoveFilm-loving, Notebook-watching, baby-craving topics of conversation; it may be hard to write decent female characters but it should be easier to simply write about them. Writer Jack Brunger also had a frequent habit of having characters talk over each other and finish one another’s sentences, which, whilst certainly keeping the momentum up for the show, sounded oddly unnatural for a text that, for the most part, strived for a realism and integrity.

The shining moments of the performance came when the script slowed down and the actors could use timing and importantly, silence, to let the true circumstances of their relationships speak for themselves. Though most of the show occurred at a breakneck speed, it was with these pauses that weight and empathy could really flow. It let the actors have room to breathe, and worked marvelously well – it was a shame that these quieter moments could not come more frequently, but when they did they certainly felt well-earned when they did arrive.

Once the script stopped obsessing over the characters and let the actors do the work, they became much more believable and relatable – testament to the acting from Cai Brigden (who had a fantastic sense of comic timing), Michael James (whose more deadpan expressions were perhaps the most natural and engaging), alongside Peter Hannah and Michael Gilbert, both of whom had perhaps the most pivotal scene in the final quarter of the play, where the clashing needs of the two couples finally led to an all out verbal confrontation. As the contrivance of the play’s opening premise gave way to more heartfelt and genuinely emotional moments, the play finally hit its stride.

Jonathan O’Boyle’s direction was incredibly sophisticated and inventive – one fantastic touch was to have the actors also do the stage directions in character, so that when two characters were on the verge of a break-up, the way they handed each other a chair to set on stage instantly set the tone of the play. Cecilia Carey’s stage design was, despite its fashion-store similarities, incredibly and satisfyingly versatile – the use of pegs to hang items as a quick and easy stage transformation was a very effective choice.

FourPlay will be playing at Theatre503 until the 28th February.