Part of a double bill of short plays at Theatre N16, you will never think about Christmas in the same way again. Follow Ivy, who works as an elf at a Christmas market, as she has the worst Christmas ever.

This week Theatre N16 is offering a double bill of two short plays, Blackhander and F**king Little Elf B*tch. Unfortunately incongruously paired, the former is a dark and twisted horror short and by the time F*cking Little Elf B*tch starts, I’m desperately in need of some cheering up. Luckily this one woman show delivers a mother load of an escape Clause – gift-wrapped and with extra jingle bells, of course. 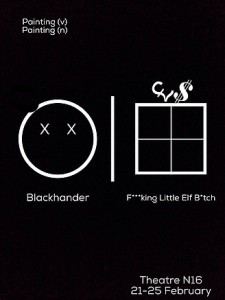 We follow Ivy as she negotiates her thirteenth year as an elf employee of a large Christmas Village – you know the ones, fake log cabins, fake snow, and an even faker atmosphere of holiday consumerism coming to a car park near you from the beginning of November. Ivy is having one of the worst Christmases ever, and takes the audience along for the ride, complete with a multitude of different characters and accents that performer and writer Katherine Newman skips between with ease. She quickly forms an effortless connection with the audience that has you hanging on her every word, due in no small part to her energetic use of the stage and good physical differentiation between characters and scenes. This elf rebellion doesn’t come up short, and as Ivy’s frustrations with her situation wreak havoc on the Christmas Village, you find yourself alternately laughing and cheering her on to greater disruption.

Showing Christmas satire in February may initially raise some eyebrows but I think this piece is best seen by weary Christmas survivors. Katherine’s writing crackles with wit and develops a huge amount of pathos for Ivy’s plight, pulling you along at a mad dash that would ordinarily risk losing some of the audience, were she not such an accomplished storyteller. Peppered with surreal moments and dream sequences, she never lets you lose place in the narrative, and if you’ve ever worked a menial service industry job, especially at Christmas, you’ll find yourself revelling in the havoc she causes.

Damnations of the Christmas capitalist trope are not necessarily new cultural phenomena, and it’s certainly nothing new to swear at Christmas (at least not in my household) but there’s something wonderfully incongruous about this adult version of childhood dreams. The elves have their own ‘recreational break portacabin’ and Santa has to go and recover after a particularly harrowing encounter with a member of the public; you’ll certainly never think the same way about Christmas again.

F**king Little Elf B*tch is running at Theatre N16 as part of a double bill with Blackhander until Thursday 25th February. Starting at 7.30pm with Blackhander, a ticket to both shows costs £12 (£10 conc). You can book your tickets here.