Firebird at Trafalgar is an exhausting performance - one that reflects a disturbing, broken Britain and its inhabitants - an important, pressing depiction.

Half way through Firebird, currently playing at Trafalgar Studios 2, a single mattress is unceremoniously dumped from the lighting rig, landing with a thump in the centre of the stage. There it lies, coated in blood and torn sheets, as the next scene begins. What had before been a gentle and lilting performance is instantly transformed into a more sinister, more cerebral piece.

Firebird is centred around Tia, a 15-year-old, naive, lonely girl, raised in a housing estate by a foster mother she seemingly despises. Seduced by the charm and free chips of an older man, AJ, she is thrust instantly into a murky, uncompromising and far more tragic set of circumstances: sexually exploited by AJ and others and locked alone in a room for an undefined amount of time. The full effects of Tia’s naivety are played out as she attempts desperately to escape the set of situation she’s found herself in. Firebird, with its 75 minute runtime, is certainly an exhaustingly packed and emotionally charged piece, but also one that is perhaps plagued by the sheer volume of narrative issues it is laden with, the script never really doing justice to the various levels on which the play operates. 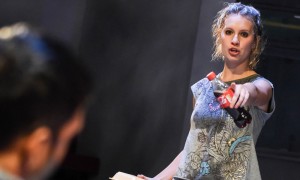 The bluntness of the bed-drop scene change is far more symbolic than perhaps intended. With this huge transformation in tone that Firebird betrays a problem – writing that had formerly been laced with subtlety and charm is instead rendered blunt, uncompromising and exhausting.

The show opens to two girls, a wheelchair-bound Tia and Katie, her friend from the ‘Centre’ playing in a field with a believable rural bliss. This seeming innocence is refreshing – the two girls show polarising attempts at escapism – in Katie’s case it is to dream of an alternate reality where she runs a zoo, for Tia it is supposedly in leaving the strictures of a urbanity to move to a more liberating field space. The two bounce off one another with an unending sense of energy, giving the piece a real sense of possibility and opportunity.

But as the play progresses (or jumps back in time), the subtleties of Phil Davies’s script are forgotten – emotional impact is no longer expressed through content, setting, or implication but through shouts, screams or arguments. Statement seems to replace inference. Firebird loses its textual intricacies and becomes far more brutal – issues and questions that have important and pressing nuances are never really explored, instead they are simply shouted out into the audience with nothing more than a casual frankness. Questions of age divide, sexual manipulation and assault have all been examined recently in plays like NYT’s Consensual or in Theatre503’s Clickbait, but here they lose an essential level of necessary subtlety. A 75 minute could perhaps be extended to really show the emotional resonance of some of these problems.

That is not to dismiss the writing from Phil Davies – the show a fantastic job of conjuring a metropolitan  environment rent with difficulties – a lack of police empathy for victims of sexual assault, or the way in which teenage girls value their own self worth. These were distinguished moments of importance. So too was the way Davies transformed the connotations of his opening scene through retrospective awareness; what began as childish innocence upon reflection has undertones of sinister manipulation – Tia isn’t trying to befriend Katie, but rather to deceive her in the same way AJ did. The childish innocence of Katie and Tia becomes a fabrication. The direction too showed some fantastic touches – the show never felt static and the use of video screens during an interrogation scene felt entirely and perfectly oppressive. 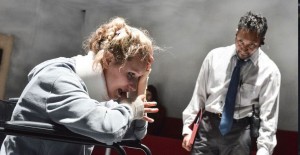 The plaudits of the show must go to the cast – especially the central performance from Callie Cooke as Tia. Though the show crammed in a huge emotional weight, she carried the narrative with a sense of believability – it was an exhausting performance and one that bodes well for the actor’s future. Phadlut Sharma has an interesting task of assuming the two central, male roles (AJ and the police inspector investigating Tia’s case) – two characters positioned in places of seniority and influence over Tia. What is most striking is how Sharma makes these two pivotal roles so subtly different yet tonally similar – reflecting the injustices of a masculine dominance in contemporary society. One mis-step is the fact that Davies brings up AJ’s ethnicity – casually using racial slurs and evoking ideas of segregation for the play. These concepts linger, never to be brought up again or addressed in the performance. In the programme interval Davies acknowledges this fault, though never seems to find a remedy for it.

Firebird is based on investigations into the now-prominent Rochdale cases – Tia’s story being an ‘amalgamation of a few different people’ that Davies knew from school (he grew up in the area) and imagined being involved in those events. It’s an unsettling notion – that this girl is a hybrid of various examples of grief and suffering –  almost a fictitious creation based on event rather than in her own right. It is a challenging idea to grapple with (one that Tim Crouch confronts in The Author with some success) – how far can a writer go in basing their play on the ideas of victims or sufferers? Is Davies highlighting the plight of the victim, or using the story to create what he sees as an interesting and engaging narrative for audiences? A difficult question with few answers.

Firebird is a play that attempts to do a huge amount in a short amount of time; the cast here shine in a show that deals out a lot while leaving unfortunately less to chew on. It is an exhausting performance – one that reflects a disturbing, broken Britain and its inhabitants – an important, pressing depiction.

Firebird will be playing at the Trafalgar Studios (2) until March 19th.