This exploration of humanity's slavery to food is grotesquely amusing and not for the faint of heart.

The programme notes for this devised piece by Clout Theatre clearly outline its aims: to explore how humans’ relationship with food has changed throughout history, focusing on the unhealthy and unnatural. Their programme further states that ‘in the case of food wastage and human perversion, these are already so extreme in life [that] we had to go far to distort the mirror’ (Clout Theatre 2016). Despite these clear aims and ‘warnings’, nothing could have prepared me (and seemingly most of the audience that night) for what was to come. Between baths of dirt, rains of milk (which spattered the front row), showers of cereal, boxing matches with spaghetti, facials of raw meat, and roast dinners of human, this show is not for the squeamish or germaphobic. 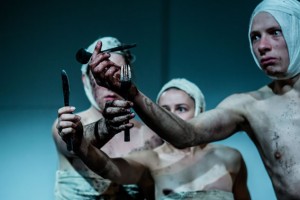 This piece is united by theme and exploration instead of a plot. However, its wordless progression has a natural rhythm to it, and its move from a fight for survival to gluttonous excess to technological manufacturings echoes the historical production and consumption of food. The show is roughly divided into three sections: breakfast, lunch, and dinner. The exact barriers between the three are demarcated by projections on the back wall but there is no definite break between sections – it is an organic process, much like humans’ obsession with what they eat. The desperation, exploration, and foraging in the breakfast section convey humans’ dependence on food for nourishment and survival. The unbridled excess and celebration of the lunch section quickly turns dark as conflict arises over the food. Then, at dinner, test tubes and bodily functions dominate, and the joy of eating is gone.

The three performers – Charles Adrian Gillot, Sacha Plaige, and Jennifer Swingler – are fearless. Their only costumes are strategic bandaging, and over the course of the evening the dirt which they sit in to start the show may be the most sanitary element covering their bodies. The lengths to which they go – and show – are intentionally uncomfortable and highly effective. In keeping with a clowning aesthetic, they never speak. This makes their personas seem both more innocently childlike and frighteningly sinister.

This show may turn your stomach, make you laugh, and change the way you think about food, sex, and human interdependence (for better or worse). It is definitely not everyone’s cup of tea. But if you’re up for a grotesque laugh and a brutal look at humanity’s slavery to food, it is utter brilliance.

Feast is playing at the Battersea Arts Centre until 6th February. Ticket prices are £12, £9 concessions.