A flawed telling of an imaginative tall-tale, in which the frontier of the Western finds its parallel in oil-prospecting in the Arctic Circle.

Les Foules Theatre return to the Vaults Festival – after gaining critical acclaim last year for Please Don’t Talk About Me When I’m Gone – with Crude Prospects, a neo-Western frontier fable set in the Arctic Circle, featuring eccentric environmentalists, blues guitar and a polar bear attack. The show was successfully crowdfunded £741 early this year.

Much of the show is told retrospectively by the protagonist, Brett, to an Alaskan cop, having been stopped whilst riding a horse and looking rather worse for wear – a narrative setup that gives the telling plenty of scope for some fantastical leaps of the imagination. Brett, we find out, is on a quest in search of her missing-in-action oil-prospecting friend Kathy. This is a show with tons of character, featuring some Coen Brothers-esque deadpan humour and oddball characters, as well as some noir-ish snappy dialogue (“Do I have a choice?” “Sure you do, but you look like you’ve had a streak of bad ones”). 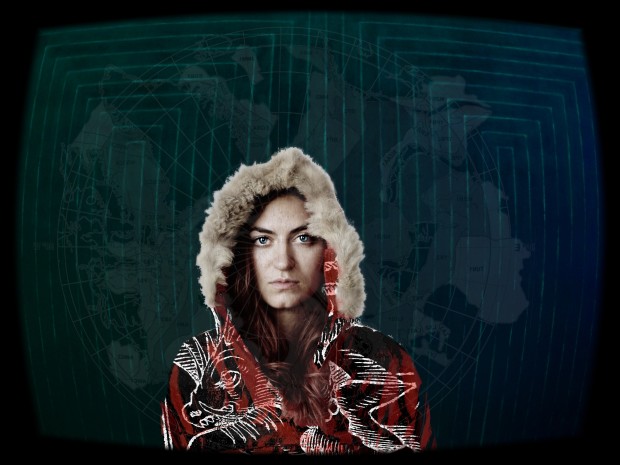 This is where Les Foules’ stylistic borrowings of Western tropes and conventions came into play – used as a way of demonstrating how we construct narratives of our past and present, transforming corporate oil scavenging into a narrative of frontier expansion.

Whilst the content of this tall-tale is unquestionably original and inventive, where the show is less successful is in the transmission of this narrative to its audience. The direction and design of the production was curiously unsuccessful in creating this world. Often, rather than experiencing the teller’s heightened imaginative reinterpretation of events, we felt instead like witnesses to an unmediated narrative – not helped by the decision to seat the audience-surrogate (the Alaskan cop who is audience to Brett’s account) onstage during some of these scenes. These early straight-narrative ‘flashback’ scenes were themselves interrupted by overtly fantastical sequences imagined by conspiracy-theorist brother Joe, making it unclear whose narrative we were now listening to – an inconsistency enjoyed by the production, with Brett stating “Kathy doesn’t talk like that. You do.”

Unfortunately, so much of this production felt blandly consistent, no matter who was doing the talking. The narrative layers and the characters within them were indistinct, with not enough done to differentiate the mythic from the mundane – both were told with the same lacklustre panache. The Russians of Joe’s fantasy were clearly Joe and Brett with their parkas pulled up, and the aforementioned polar bear attack was merely narrated to us, closing the mystery that had been effectively built around why Brett was (although not really visibly) injured. Elsewhere, the build of tension and its bathetic release were used to create successful comic moments – revealing what seemed to be a police pursuit over walkie-talkie to be a caribou hunt, for example – but as a narrative structure it dissipated the potential for the epic and mythic atmosphere that Crude Prospects needed.

Lennand Sillevis proved an exception, giving a genuinely surprising transformation into the prospector John Nash following his performance as Joe. To give the production credit, the accents were incredibly strong across the board, and the indistinct doubling was certainly at least partly intentional, with Brett repeatedly mistaking the Whaler (played by the same actress) for Kathy. But if the intention was to make the whole play part of one fictive world, so that the production as a whole (and not merely the backstory) was the tall-tale, then more cohesion was needed in the creation of this myth. The required balance was most effectively achieved in the final scene – finally, we were given a (seemingly) unmediated representation of the elusive Kathy, and the scene was charged with the atmosphere of an encounter with the real for our yarn-spinning storyteller. However, the juxtaposition of this with the eccentric eco-terrorist reminded us of the strange, outlandish world the story was still occupying. This final suffusion of the real with the fanciful was somehow touching, as if we were able to see this alien world from another perspective, and I wish it had characterised more of the production.

Crude Prospects is a complex and labyrinthian fable, with inventive flair in its far-fetched narrative but not in its telling of it.