Les Foules Theatre Company won the 2015 Origins Award for Outstanding New Work at the Vault Festival for their play Please Don’t Talk About Me When I’m Gone. Returning to the Vault Festival this year with Crude Prospects, a “kicked-up Western gone North”, they turned to crowdfunding to finance their projection equipment. Whilst they missed their funding target of £1,500, they were able to keep the £741 they had raised from 19 backers in a month, having applied for ‘flexible funding’ – a crowdfunding method which eliminates the ‘all or nothing’ rule enforced by other crowdfunding sites. Following our review of Crude Prospects last week, we caught up with Les Foules Theatre to hear about their experience of crowdfunding. 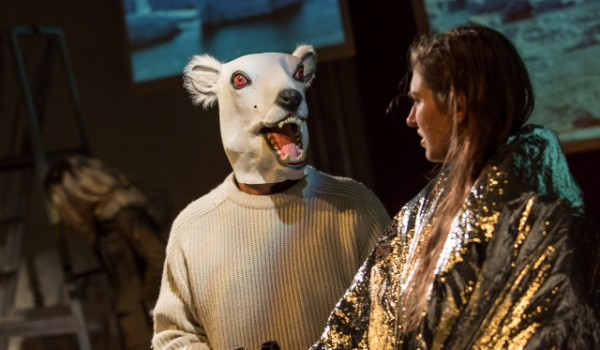 TB: Why did you turn to crowdfunding?
LF: We were putting in an application for an Arts Council England grant back in November and the process gets you thinking about how you can raise 10% of the funds for that project elsewhere – a crowdfunding campaign is the obvious starting point. We hadn’t done one since 2012 so we felt that the timing was right.

TB: What do you think makes a successfully crowdfunded project?
LF: Well, the campaign itself has to do a good job of representing what you need the funding for and what the project is about. Personally, we like to create trailers that offer a flavor of what the show will be, rather than film ourselves as ‘talking heads’ appealing for funds – but both seem to work.  Whatever happens, it seems that really breaking down your costs for your funders in an important part of the process. Essentially, the success of crowdfunding project when you are not a very well known entity is about everyone who’s involved (actors, writers, directors, designers etc) tapping into their personal networks and spreading the words far and wide as possible. And about having a very supportive and generous personal circle who are willing to get the work going.
.
TB: How was your experience of the crowdfunding process? Would you recommend it?
LF: Our friends and family were brilliant, and they contributed generously. Without them we’d be having to self-fund the show, which would be extremely tough on us. Theatre making is hugely expensive and you pretty much have to wrangle everything for free anyway. On this one we’ve had rehearsal space generously donated to us, so we’ve been able to use the crowdfunding to cover our basic material costs – projections, set and costume. That’s gone a long way to alleviating the personal financial pressure of putting on a show and making it happen in the first place. If you don’t mount a campaign every five minutes it’s definitely worth it . That said, it’s not an alternative to subsidization if you’re an emerging theatre company as it really will only be friends and family who come up trumps as the main backers of the project.  Your goal has to be reasonable, and you have to know that despite everyone’s generosity it will barely touch the sides of a production costs: everyone involved in the project is still likely to remain unpaid.  And it can feel a bit like a weird kind of artistic panhandling at times …  Still, we can’t complain – we’ve been very lucky on this one.