First up is taxidermy and performance artist Charlie Tuesday Gates, creator of Sing For Your Life, an animal rights musical that caused a storm at the Vaults and Edinburgh Fringe Festivals last year for featuring puppets fashioned out of the taxidermy carcasses of real animals. Dubbed “The Greatest Show That Ever Died” and boasting a genuinely decomposing cast, the show was almost wilfully misunderstood by some (quote: “it seems inherently disrespectful to be exploiting (the dead animals) for entertainment”) whilst others recognised its genuinely subversive power in exposing the hypocrisy of its squeamish audience. Personally, even amongst new work by internationally acclaimed companies such as Complicite and GECKO, Sing For Your Life stands out as one of the most memorable highlights of the Edinburgh Fringe, and the most genuinely effective piece of political theatre I have witnessed to date – I am, at the time of writing, still attempting to stay vegetarian as a result of having seen a mink perform a striptease of its own skin onstage. Charlie Tuesday Gates raised £5,400 on Crowdfunder from 124 backers in order to help bring the show to Edinburgh – a sum that helped to cover the costs of a live band, a set and an extra puppeteer.

“A powerful howl of injustice with a distinctive creativity and grotesque charm all of its own.” – The Church of England 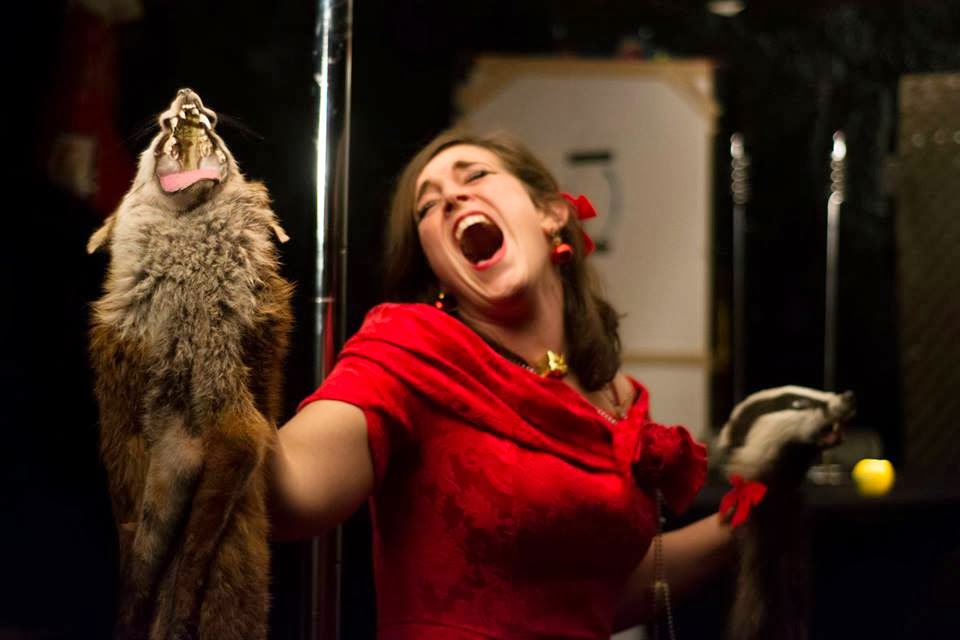 Charlie Tuesday Gates raised £5,400 on Crowdfunder from 124 backers for “Sing For Your Life”

TB: Why did you turn to crowdfunding?
CTG: Sing For Your Life is pretty out there …and surprisingly it was hard to gain funding through normal avenues. I’m not especially good at filling out forms or applications, you seem to need a PHD in invisible hoops to fill one out properly. This process meant I could get some of the money that was needed without having to be ‘approved’, so to speak.
Crowdfunder was the perfect platform to advertise for help as it already had a huge network of people looking and willing to invest in interesting and unique ideas.

TB: What do you think makes a successfully crowdfunded project?
CTG: It’s very hard convincing randoms to give you money, especially to get the ball rolling. Your project has to really stand out to be worth taking a punt on from a stranger, so a strong network of people who already like and support your work is essential.
To turn that support into £, successful projects seal the sponsorship deal with experiences money previously couldn’t buy. Successful projects are engaging: People want to feel like they are part of something, like they’re really making a difference to the world, and being heavily rewarded is a huge incentive. Personally, I just went full steam ahead with everything all the time. ALL THE TIME. Mostly spam, good old fashioned spam…

TB: How was your experience of the crowdfunding process? Would you recommend it?
CTG: It was a candle burning, stomach churning, ball-busting month for me. A one woman marketing machine; relentless, ruthless, shameless…
Some of the more unconventional but highly amusing things I did was post internet dating conversations of me hustling for money. 98% Of the time I was unsuccessful, the fruits of my late night labour only managed to generate £50 English pounds. It wasn’t worth it- I had to talk to strange men about my feet- an enormous amount of work. Fundraising is basically a full time job. A hard one.
Would I recommend it? That depends. At the end of the day you have nothing to lose. If you need funding fast and previous pleas for financial help have fallen on deaf ears, you’re totally in with a chance. Working on your own is extremely hard though. I can not emphasise enough how much stress I was under to drive this home every day. Having a group of people to help will make it mentally manageable.
Would I do it again, probably not. Was it worth it, yes.

TB: Do you think the crowdfunding process is just a case of the theatre industry being subsidised by those who work within it?
CTG: It would be great if everyone got the financial support they so desperately needed, but with the arts sector being increasingly marginalised, that funding simply doesn’t exist. Crowdfunding has given individuals the power to source outside of the mainstream easily, to produce work that people actually want to see from people who genuinely believe and support it.

To keep up with developments in Sing For Your Life’s future, follow the show on Facebook here.