A screwball comedy about OCD, a box, and inner demons – a heartwarming delight

At first, I wasn’t sure what to make of this piece. There is a man who lives in a box in his living room. He is the only presence on stage, aside from the occasional loudspeaker voice of his childhood spelling game. And (if the whole sleeping in a box thing does not make it clear) he is no ordinary man. His OCD is out of control. He has a knack for getting himself into the most inappropriate situations. His family life has fallen apart. And his dreams dwell into an unspoken past. The audience does not even know his real name until the end of the play; he simply self-describes as ‘Boxman’. But the plot kicks off when Boxman is out on an Asda run in the early hours of the morning and comes across a cashier he falls instantly in love with. The ensuing hijinks are by turns cringeworthy and heartwarming, with the right balance of self-awareness.

The piece’s beginning is the weakest link, perhaps because it has the most unanswered questions. By the end of the play, however, those questions are all answered through well-crafted allusions to the protagonist’s past. It is a very talented, subtle, and clever handling of backstory – the audience is fed just enough to explain the current situation but never the full thing in one go. My only wish is that the backstory had started ever-so-slightly earlier in the narrative.

While a one-man show, there are several characters in the narrative. When the characters were the ones Boxman was interacting with in the present, Murray simply acted the reactions to their lines and actions and described them in his idiosyncratic ways. When he was talking to or about characters in his memories, he deftly and subtly switches voices and characters to play them all. He did not do much to differentiate, but it was immediately evident whose voice he was talking with. 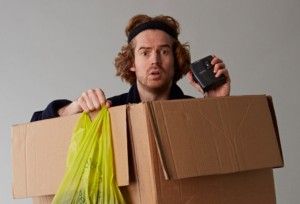 At many turns, the humour is undeniably crude – perhaps a nod to Boxman’s bizarre inner world and the equally bizarre world he lives in. It might be too much, but it does provide some hearty laughs. The pace is slightly slower than some other one-person shows seem recently, but its one-hour run time is ideal for the story.

According to the event website, this play is currently being adapted into a feature film. A piece with such heart and memorability has excellent potential in another medium – especially one where all the crazy and unusual happenings of the play are illustrated in what one hopes is an equally crazy fashion. Ruaraidh Murray is one to watch, and perhaps Boxman will be on our screens in a few years. Until then, this extraordinary stage show is not to be missed.

Written and performed by Ruaraidh Murray