Looking at drama schools and university courses for next year? Well now is the right time to be looking at applying for auditions. It seems early days, I know, but it will give you time to get your head around the differences between each school and what they are looking for in their auditions. Now the hard part- where do you start? After attending many auditions and bailing out of even more, I chose to study a degree at Colchester Institute. There are so many options out there, but I decided on a degree course for one reason alone- student loan. Trust me, it’s worth it if you can’t afford conservatoire prices. My course was 80% practical- ensemble singing, 1 to 1 singing classes, tap, ballet, jazz, body conditioning… You name it, we did it. Yes, at the end of my third year, I had to complete the dreaded ‘dissertation’, but otherwise, it was on the same level as vocational training. However, some university Musical Theatre courses are not the same and will have a substantial amount of written work in their syllabus.

I attended 3 vocational auditions and 4 university course auditions. The auditions for each were pretty much the same- a movement class (rolling around on the floor, pretending to be a worm), 2 solo vocal pieces and 2 monologues. Well, that’s what they ask you to take with you. You’ll probably end up doing a movement class, performing half a song before they stop you to ‘workshop’ it and then one monologue. When I say ‘workshop’ a song, I mean that they will use a technique that they use in their lessons to see if you can adapt to it and if it works for you. It also shows them if you can follow directions, so be prepared to do anything that is asked of you. 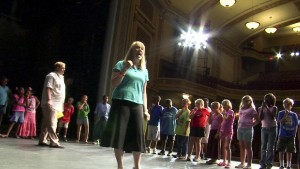 Be aware to read their guidelines of what they ask of you for their auditions. The majority of my auditions asked for ‘contrasting songs and monologues’. The first thing I wondered was what the word ‘contrasting’ meant. Contrasting years? Contrasting genres? Contrasting emotions? I soon found out by attending my first couple of auditions that it meant all of these things. The more contrasting, the better. So, a legit song from ‘Oklahoma!’ and an upbeat rock song from ‘We Will Rock You’ would work fine. Also, be aware of the overdone songs that they hear every year without fail. In the 3rd year of my degree, I sat in on the auditions for the new first years on the Musical Theatre course and I heard ‘Pulled’ from ‘The Addams Family musical’ about 8 times. The ones that stood out were the songs which I only heard once through the auditions. Think outside the box. That goes for conservatoires and universities. I will talk you through a list of Musical Theatre audition ‘do’ and ‘don’t’ songs in a later blog.

What I did find that helped me make a decision of schools to cross of my list was visiting the places in person. I walked into one of the universities I applied for (which will remain nameless!) and I instantly felt as if I didn’t belong there. I can’t put my finger on it, but there was something about the place that made me feel I didn’t fit in. There was quite a dead atmosphere, the walls were grey and the dance floors were not sprung. Any dancer will know what I mean when I say that was a turn-off!

If you don’t get offered a place, don’t let it get you down. It has been said that certain drama schools and university courses have a certain ‘look’ that they go for. For some places, that may be true and if they are looking for tall, leggy blondes and you are an average height brunette, then that may be the case you are not chosen, so don’t let it put you off your next audition. That school may be doing you a favour if they were asking for £18,000 a year out of your own pocket.

So have a good look around, don’t jump at the first place you see, read the audition guidelines thoroughly and try to look like you’re having fun at your auditions!