An electric, compelling retelling of Shakespeare's tragedy which puts the audience in the heat of the action, lead by a masterful actress.

What may be the hottest ticket in London this January is not the easiest to find; its venue is almost hidden by unfortunately-timed construction around the Elephant and Castle tube station. However, cheerful chalk writing on the sidewalk steers audiences in the right direction. Draper’s Hall is not a conventional theatrical space – the hall is a small wood-floored room dotted with columns – but its size and set-up creates an atmosphere of camaraderie. As soon as Emily Carding – in character as the titular murderous king – steps into the audience to welcome them one-by-one into the venue, there is no doubt this is a night that will transcend its humble surroundings. 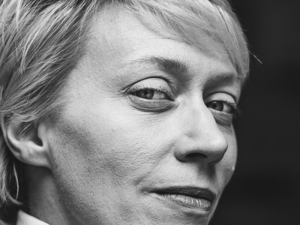 Having seen and enjoyed Brite Theatre’s show in Exmouth in May 2015, I was intrigued to see how it would develop over its performances throughout the rest of the year (including at the Edinburgh Fringe) and would move into such a radically different venue. In contrast to the traditional end-on stage in Exmouth, this run is staged in the round, with the audience in a tight circle around Carding. This works brilliantly due to the fact that the lone performer is forced to move among the seats, interacting with the audience throughout (which is incidentally a massive strength of Draper’s Hall). They become her co-performers both implicitly and explicitly. She never speaks a line without direct eye contact with someone in the crowd. The viewers become her courtiers and soldiers – some even become named roles. At the opening of the show, select audience members are given placards with their character’s names; they are pulled up to the stage at points throughout the show for Carding to manipulate to Richard’s will. They become literal pawns in Richard’s game for the throne. And like pawns, they are disposable. When each meets his or her untimely doom, they are slapped with a nametag labelled DEAD. It’s one of the more fun mementoes to carry from a show.

Obviously this is an unusual Richard III in terms of traditional Shakespeare. The text is abridged, but every line in the script is from the original character’s dialogue. Carding not only delivers an intelligent, electric, fascinating villain but carries this charisma into every intimate interaction, never breaking character even when an audience reaction prompts a sparkling ad lib. It is further clear that, even in a ‘normal’ production, she would be a compelling Richard. Her understanding of Shakespeare’s language and the role’s psyche is uncannily superb. When she locks eyes, they are hard to forget.

Over the course of several months it is clear that this production has gone from strength to strength. Its open audience involvement and relentless energy may make this Richard III most exciting Shakespeare currently in the city. This show could be a headlining act on the West End. Book your tickets now, and pray you don’t wind up DEAD.

Richard III is playing until 30th January 2016 on Thursday, Friday, and Saturday evenings at 7.30pm.

Tickets are available through Eventbrite and cost £11.49 (concessions £9.43)