Review of: Minotaur at the Unicorn

A brilliant piece, Minotaur is perfect for both youngsters and adults wanting to see classical tales in a new light.

There’s something rather profoundly positive about the tragic Minotaur, currently playing at the Unicorn Theatre. While the plot of the play itself, which sees the minotaur slain, Theseus crowned King, and Aegeus falling to his death, certainly has a downbeat tone and ends with no small amount of ambiguity (will Theseus go on to be a good King? What happens to Ariadne?), there was something rather thrilling about this piece of theatre being produced by Unicorn themselves.

A retelling of a Greek classic carries with it both expectation and to some extent the chance to break the mould of orthodoxy that can surround the story. Through their revision of the Minotaur story, writer Adam Peck certainly went for the latter approach. The young Theseus, travelling to find his absent father King Aegeus of Athens, wanders into a political mess on the isle; the Athenians are being forced to hand over 14 children to the King of Crete. This infant transfer is to serve as payment for the murder of the Creteians King Minos’s son (Minos being played by a wonderfully Machiavellian, almost Tim Crouch-esque Rupert Holliday Evans). The children, Minos decrees, will be fed to the famous minotaur – Minos’s own son cursed to live in the legendary labyrinth in bestial bull form. There, the minotaur is tended to (and humanized) by his sister Ariadne, who visits and sings to him regularly. From here the story progresses as mythology dictates – Theseus slays the Minotaur, returning home King of Athens after his father’s suicide. 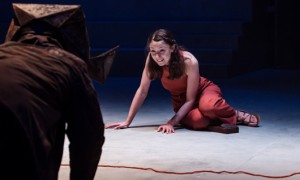 Though the plot is well known, this is no legend by numbers. Theseus is no longer a hero but a slightly deluded youth, just as the  Minotaur here is no longer a monster but a tortured and lonely soul. The emphasis is placed on the familial context of the play, and when the Minotaur dies, it is a brother that is lost rather than a threat removed. Marianne mourns his passing, and the masked, horned head of the beast is taken off to reveal the man beneath. No one cheers at this supposed victory. Ben Adams’s physicality as the Minotaur is essential and poignant here.

As a play aimed at children (though there were many teary-eyed adults come the final blackout), Minotaur succeeds wonderfully. Never slowing or stopping, its hour-long runtime kept all attentive from start to finish. But being captivating is only one side of the story. The play manages to delve into an often retold  classic and showing that there are always interpretations; ideas can always be presented in different ways. This is an incredibly important lesson to learn when you’re young – the stories you hear are not necessarily the ones that need to be told. Theseus and the Minotaur is not a tale of man conquering beast, but instead a family tragedy given mythical form. These lessons are still key today.

So many elements of this show deserve praise – be it the set, in its antiquated in-the-round style, or the beautiful minotaur mask; both monstrous and humane. If there are to be quibbles they’d be minor – Ariadne seems potentially sidelined in a very masculine piece, and Aegeus’s suicide felt slightly anti-climactic, (suffering the same fate that many productions of Les Miserables do while trying to show Javert’s death). But these are minor issues in a fantastic piece, and well worth a visit, no matter what age or level of classical awareness.