Review of: Jekyll and Hyde

Produced by:
The Cockpit

The 1920s don't always serve the classic story, but it's a gorgeous production aurally and visually.

The Cockpit Theatre in Marylebone may have the largest black box theatre I have ever seen. While not a fancy space, it aptly fit Jekyll and Hyde – its size and set-up meant that the audience was incredibly close to the performers, yet the corners of the space were still shrouded in shadows – shadows which seemed to have the potential to form into monsters roaming the streets of London.

The plot basics follow Stevenson’s classic novel: the doctor Henry Jekyll – convinced that a single human can house several distinct and disparate personas – sees a transformation occur in himself as a savage, brutish Edward Hyde emerges from his own psyche. As these transformations become more frequent and violent, his friends, colleagues, and fiancée are shut out and seek answers. Oliver Hume makes both ‘characters’ drastically different from each other – a tremendous feat considering that it is the rare audience member who does not know the ‘twist’ today.  His voice, stature, and gestures were of two separate men. The rest of the cast were double or triple cast to fill out the remaining roles, and all were excellent. Narratively, there were a few alterations from the source novel, but this is to be expected in a work of just over two hours including musical interludes. However, the brutality of the source remained. 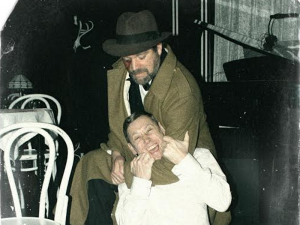 The main selling point of this show was the jazz age aesthetic – the stage was set up like a 1920s cabaret, with a live pianist at the back and appropriately costumed characters. Some scenes were even set in a club. The two ladies in the cast (Foxfield and Gain) performed classic jazz songs between scenes, sometimes even between snatches of dialogue. Foxfield’s voice in particular possessed a stunning, mellifluous power perfect for Gershwin, Sinatra, and Porter. The only weakness musically was what seemed to be an over-reliance on only the most recognisable of jazz numbers. In such a production, it would have been fascinating to see less celebrated yet no less beautiful works helping to tell the story – even less well-known ones of Gershwin would have been welcome instead of ‘The Man I Love’ sung at three different points in the show. While the music was ostensibly there to underline the plot and set the mood, it could have also served as a showcase and held the audience’s attention more effectively that way.

Following on from above, it is debatable if the music even served the story. While adding an effective atmosphere of mystery and providing a backdrop against which Hyde could conduct his nocturnal pursuits, the jazz added very little – if anything – narratively. The point of adding such a distinctive element to the production when it added little to the actual storytelling or the audience’s understanding of the characters seems like a gross misstep.

While not memorable for all the right reasons, Jekyll and Hyde never bored. If this piece were developed further it would be interesting to see how the jazz may even more effectively underline – instead of undermine – Stevenson’s tale.

Jekyll and Hyde runs until 6th Feburary 2016. All shows are Tuesday to Saturday at 7.30pm plus Saturday matinees at 2.30pm.

Script: Eric Gracey, from the novel by Robert Louis Stevenson