Review of: Jane Wenham: The Witch of Walkern

Produced by:
Arcola Theatre, Out of Joint and Watford Palace Theatre, in association with Eastern Angles

Rebecca Lenkiewicz's play, about an 18th century witch hunt, explores how women are expected to behave and how suspicion can destroy a community,

Jane Wenham: Witch of Walkern will inevitably be compared to plays like Arthur Miller’s The Crucible or Caryl Churchill’s Vinegar Tom. But, by setting this play a few decades later, in 1712 when witch hunts were much less common, writer Rebecca Lenkiewicz presents us with a more nuanced look at the way unconventional women were treated. It begins shortly after a woman has been hanged for witchcraft in a Hertfordshire village, with her daughter Ann left alone and struggling to cope. Reverend Crane is convinced that there are more witches in the village, though the bishop doesn’t believe in them and tries to dissuade him. The accusations build up around Jane Wenham, until Crane imprisons her and tries to prove her guilt. Many of the local people are initially sceptical of the claims, but the death of a child leaves them desperate for answers, and the village becomes increasingly distrustful of this old woman who collects herbs and refuses to be married. 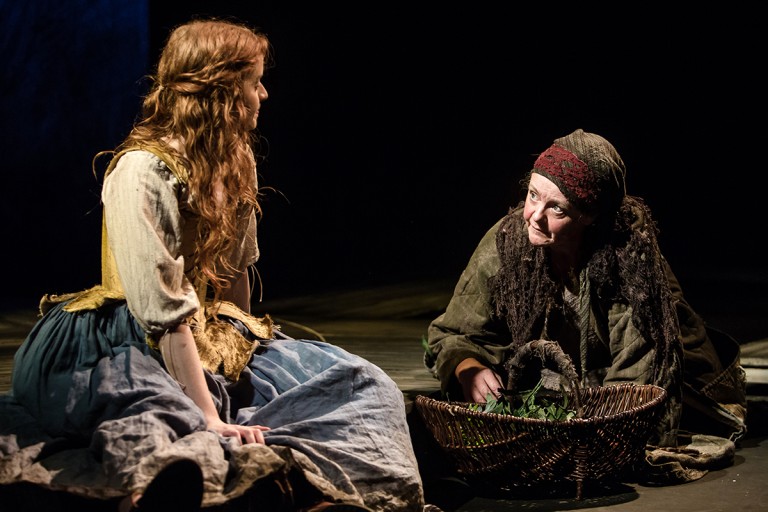 The first act cleverly avoids any sense of the mass hysteria that often goes with this topic. Instead it focuses on the atmosphere of suspicion that women were under, constantly having to monitor their words and behaviour for fear of showing any abnormality. The second act is powerful and graphic, painfully depicting a mother’s grief and showing the torture that ‘witches’ were forced to endure in the name of evidence. This is a production that raises interesting questions about the roles women are expected to play in society. It’s impossible not to view it through modern eyes, considering feminism and intersectionality – being a woman was certainly a struggle, but things were even more difficult if you weren’t straight, white and married. Partnerships are important here – Reverend Crane is single, but his gender and his commitment to god keep him safe from scrutiny, while Ann and Jane are both considered suspicious.

James Button’s design is simple but cleverly used – a circular wooden floor where gallows stand ominously throughout, a reminder of what has happened, and what could easily happen again. This leaves space for some inventive lighting design by Richard Howell, with lights set into the stage representing a river, and an opened trapdoor becoming a fire for the women to tell stories around in gorgeously haunting shadow. The Eighteenth Century costumes are also lovely – washed-out greens and beiges for the poorer villagers, austere black and white for the religious men.

The acting is taut and polished throughout, with an exceptional performance from Cat Simmons, who has real presence and grace as Kemi Martha, the bishop’s Caribbean housekeeper and reluctant mistress. Kemi seems to be the rational force of the piece, honest and caring in a world that does not look kindly upon strangers. There is considerable humour in the production too, especially in the conversations between the reverend and the bishop. The fanatically religious reverend’s arguments become increasingly ridiculous, as he accuses Jane of everything from child murder, dancing “in a sinister fashion” and sleeping with a chicken. The bishop, played brilliantly by David Acton, blinking and twitching with always-polite indignation, provides much more of a reasoned, contemporary argument.

Though Jane Wenham (played by Amanda Bellamy) often seems more of a projection of the other characters’ ideas than a fully fleshed-out character, this study of village life, with all its guilt and secrets, is an interesting look at how suspicion can destroy a community.