Review of: Iphigenia in Splott

At first glance the ancient Greek story of Iphigenia – sacrificed willingly by her father Agamemnon to aid the Greek cause against Troy – bears little relation to present-day happenings. Likewise, at first glance Iphigenia in Splott seemingly makes no attempt to connect with the legend. Here we see Effie, a working class Cardiff woman whose perfect week is one spent hung-over after nights on the lash. But she quickly begins unpicking the labels (‘skank’, ‘slag’, and the like) hurled at her, and from these musings a story emerges – one of a casual fling leading to her great tragic secret. Effie is the only figure on stage, the only voice telling her tale. She seems to reclaim it from the forces of oppression – poverty, men, and austerity – bearing down on her from all sides. And while a fictional tale, her vivid characterisations of her own reactions and of the people who cross her path cast a harsh light of truth over her words. At the play’s climatic moments, it becomes clear why Effie is the Iphigenia of her time and place, and why her sacrifice is no less noble than that of a legendary Grecian princess. 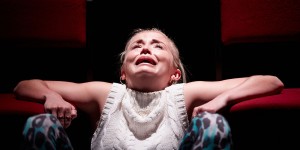 The power of Effie’s words and harrowing journey would not have been fully realised were it not for the truly electric performance of Sophie Melville. Every word is impeccably delivered in a Welsh accent hardened by a rough city life, and how those words fly. The frenzied speed of Effie’s speech is barely noticed until she pauses, and she keeps the audience with her through every flying phrase, every strong word, every exclamation of passion. She delivers the brutal words with the conviction and elegance of poetry. Without her, the show would fall flat, and she never lets the momentum drop. It may be one of the finest performances in London this season.

The National Theatre’s Temporary Theatre is a large black-box venue – ideal for the production to comfortably accommodate the audience (the preview attended was nearly sold out) while not losing any intimacy. It also served the show’s ingenious, unique light and sound design. A low, constant wash from overhead lanterns illuminated the entire space, occasionally changing focus to denote changes in scenery. However, the majority of the lighting comes from fluorescent tubes – some stacked at the back of the stage, others spread around the floor. When turned up to full power at the show’s very beginning, the effect is blinding. Elsewhere, these lights’ changes are almost unperceivably subtle, but a change in mood is certainly noted – for instance, in the club scene. The sound design is another nearly unnoticeable yet effective addition. The volume never reaches above a background hum, yet each floating sound conveys the atmosphere of Effie’s tale.

Running at just under ninety minutes, the play is short enough for Melville to consistently and effectively engage the audience but long enough for the viewers to be emotionally pulled into the story. When the play concluded, Effie had engulfed the audience in her narrative, implicating them in the chaotic, heartbreaking chain of events. It is an unforgettable event and certainly not one to miss.

Iphigenia in Splott is playing until 20 February at the National Theatre, South Bank, London, SE1 9PX. Performances are 8pm Monday-Saturday and 3pm Saturday.