Coulrophobia is a truly fantastic exploration of the limits of clowning.

Coulrophobia is a truly fantastic exploration of the limits of clowning. Two apparently ‘traditional’ clowns, Dik and Adam, find themselves trapped in a set entirely made of cardboard in what the blurb promises to be a ‘very untraditional’ situation. The night I went to see it I was part of what Dik rather reassuringly told us was a ‘small and therefore intimate audience’, however, this did not stop both actors pulling out all the stops and confidently delivering one of the most hilarious and yet heartbreaking shows I have ever seen. 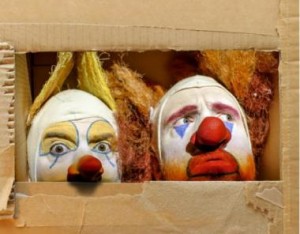 The absolute highlight of this play was the way the two performers effortlessly manipulated the audience into making us feel like we were completing and creating this show together. ‘Audience interaction’ is far too tame a word for it; one of the very first scenes comprised of three members invited into an impromptu hair salon one half of the stage with a rather bemused band consisting of a saxophonist, an accordion player and a guitarist (all cardboard instruments, naturally) serenading a group of boogying audience members in the other half. Those of us not dragged up to join the party to claim cardboard cocktails and do our bit of gyrating cackled in our seats and, oddly, felt rather left out. Rarely is it in an ‘audience interaction’ show where those not made to interact feel like they’ve missed something, and this is completely down to the genius of the two clowns and the piece they have constructed together. Usually there’s a feeling of the performers being more ‘aware’ of the piece and how the script runs than the audience is, so that every interaction feels rather forced; however, the announcement by Dik that ‘The script says we’re going to go into the audience and do some improvisation now’ accompanied by loud groans from those in front of me as the two started clambering over seats and people alike completely obliterated this forcedness. Obviously, this is not just down to expert writing – the fact that the two clowns visibly loved every moment of the action, even when having to pretend to a vegetarian audience member that the (very obviously) cardboard steaks were Portobello mushrooms, was truly a joy to watch.

However, all of the tomfoolery described does not mean that this was any sort of normal slapstick clowning piece. The overarching plot of the sinister Poco the Clown lends the entire piece a much more sinister undertone; only being a voice over the speakers at first I was worried that any physical appearance onstage would ruin the illusion that had been created. These worries soon turned out to be naught, as Poco appeared as a puppet, but a puppet that acknowledged its puppet-ness, forcing one clown and then the other to operate its head and feet. It was truly terrifying to be convinced of the power and cruelty of this inanimate object, manipulated and given character by the very clowns it was supposed to be subjecting. The fact that Dik and Adam realized this paradox and didn’t try to hide it made the entire section only more effective.

All in all this show is a truly brilliant dissection of the methods of traditional children’s clowning, pushed right up to and beyond the boundary of what is ‘expected’ clowning behaviour. If I had one criticism it was that sometimes the miming and dancing sections could have been a little bit snappier and more exact, but the fact that this something which is even mentioned here shows quite the depths of the barrel I had to scrape to produce even the slightest negative aspect of the show. Pickled Image’s interpretation of clowns is just simply dazzling, and next time they show up I’m going to be in the front row so as not to be left out of the party again.