Review of: Clickbait at Theatre503

Produced by:
Fools and Kings and DEM Productions

A fantastic exploration of the nature of sexuality in an internet driven world, Clickbait is well worth a watch.

There are a few fantastic flourishes from writer Milly Thomas here. Her creation of an assortment of prowling (through some wonderfully choreographed ensemble work), masked internet trolls that emerge at various moments to provide blunt, anonymous, reactions to the events on stage. After their first appearance, they are summoned at sporadic intervals to provide a commentary on the plot developments – almost akin to a bastardised Greek Chorus. 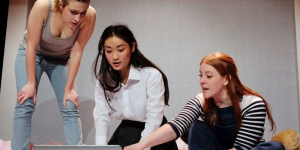 The difficulty with Clickbait is that, though its ideas are both pressing and important, the play feels as though the material was stretched somewhat to fit the 145 minute runtime. While the first act saw the stage transformed into a giant four-poster bed (Nicola’s symbolic safe-space after she has reclaimed her own body after being faced with exploitation), the second act sees Nicola relocated to a white and pink office, all pristine in an oppressively clean and cute-sy manner. The sickly smell of an audience member eating strawberry ice cream was strikingly apt. The play, as it continued, moved from the realms of the relatable and into a far more tenuous and slightly less convincing position, the familiar cushions transform into the sterile white office (decked with a choice few sex toys).

This may have been the author’s intention, but it meant the discussion that had existed between the material and its audience was slightly derailed as they are forced to understand the logistics of Nicola’s endeavour (creating a series of booths, across the country, where users could record themselves having sex – the ultimate aim being to drown revenge porn in a sea of content and ultimately normalised the idea of sex in a public space). The text sometimes resorted to emphatic tropes (‘I love you….but I wish you’d never been born!), and as it came towards the close laboured perhaps too hard to bring everything full circle with some scenes potentially unnecessary.

With some great directorial touches and consistently engaging performances from all (alongside a versatile and well-used set at Theatre503), Clickbait is a fantastic event  it gives audiences a space and content to ponder the nature of sexuality and sexual pleasure in a world currently reconfiguring the definitions of privacy. However, some of the debate seems too thinly spread at times, perhaps losing
the punch it may have desired.