Review of: Picture of Dorian Gray

Dorian Gray shines but the production feels constrained in this portrait of a perpetually young man.

Adapting The Picture of Dorian Gray is no mean feat, and a task that few would seem ready to take on. The book is prone to such intense textual wit, laced with a tongue in cheek attitude and pondering nature that it seems to need a novel-based context to allow its ideas to fully breathe.

As a result, transferring the show to the stage was always going to present difficulties for Merlin Holland (Wilde’s one grandson). There must have been a number of reasons why Wilde himself chose the novel over the theatrical form, and this fact seemed to irk the production to a certain extent. Confined to the black box stage, with minimal set dressing while still aspiring towards an original, 19th Century setting, European Arts Company’s Picture of Dorian Gray seems to lose some of the wonder of Wilde’s tale. It cuts back at the novel into a two hour show – the content is bite-sized, and sometimes not given the same room to breathe as it is in the books. 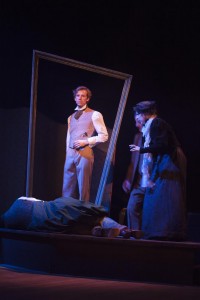 This is remedied somewhat by some assured performances – particularly from Guy Warren-Thomas in the main role. What begins as a timid and muted Gray becomes gradually something more reptilian and inhuman. The face, ironically, transforms, even as it remains fixed in time. Inexorably, Gray’s tortured morality is teased out and his personal ultimatum is laid bare; Warren-Thomas here is comfortably convincing.

The four person cast were all promising and used their multi-rolling skills to great effect; seldom resulting to caricature and often showing great physical flexibility. The multi-roling also supplies a fun theatrical phenomenon – as Warren-Thomas’s Gray remains constant, the changing faces and characters blur past him in a state of constant flux – a nice touch. John Gorick’s Harry Wotton, though at first marred by a perhaps too emphatic languor on a chaise longue, eventually became a fantastic centrepiece in the closing scenes and aged his character with suitable aplomb. The size of cast had its faults however – scene changes dragged and lost the rhythm that a lot of Wilde’s text relies upon. It is entirely possible that the show, given a larger stage and larger cast, could breathe a new lease of life into the script; it felt slightly wanton in its current form.

There is never anything wrong with performing an orthodox show, and Holland, the director Peter Craze and the team have to be commended for their search for Wilde’s purity. While the second act certainly has moments that create a rhythmic and stimulating show, on the whole The Picture of Dorian Gray feels almost too adventurous for such an enclosed space. Unlike its protagonist’s painting, hopefully in the future it will be allowed to age well and given room to breathe.

The Picture of Dorian Gray: