Review of: The Little Match Girl

Produced by:
Moon On A Stick

This is a charming festive story, but it tries to fit too much in.

Hans Christian Andersen’s classic tale in almost unrelentingly bleak. A little girl, shoeless and hungry, lies down in the snow. She burns the last of the matches she had to sell, imagining beautiful scenes of warmth and comfort, before freezing to death. Not the most uplifting festive story, you might imagine. 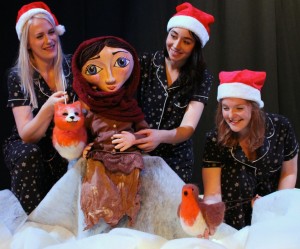 In attempting to make The Little Match Girl suitable for young children, Moon On A Stick have made so many changes as to make the story almost unrecognisable. It starts with the girl getting a visit from some adorable animal friends – a stray cat called Pirate and a robin bringing messages from her dead grandmother. As she shares her food and chases away their enemies, we are reminded how important it is to be kind and brave.

She also talks to her dead grandmother, who we’re repeatedly told is “living on the moon, watching her from the night sky,” which might lead to parents facing some awkward questions after the show! This is followed by a visit from a snowman, who could have come straight from Jim Henson’s Labyrinth, then one from Father Christmas, who gives her a very special present. It all feels a little episodic, however – the bit with the cat, the bit with the snowman, the bit with the bird – rather than coming together to form a cohesive narrative.

The design is incredibly simple – mostly boxes covered in fake snow. There’s very little in the way of lighting design either, though there are some nice touches involving LED lights on the performers’ fingers. This leaves the focus solely on the puppets and performers. The three performers, in matching pyjamas and Santa hats, are engaging, interacting with their excitable audience and revelling in their increasingly frustrated cries of “he’s behind you!” They seemed unfazed by the distractions of a relaxed performance, and it would be great to see more theatre companies doing these.

The puppets are ultimately the stars of the show – made by the company, they’re undeniably gorgeous, all pitifully huge eyes and gaunt cheeks. The little match girl, voiced and operated by Maia Kirkman-Richards, is a loveable urchin, optimistic in the face of hardship, while Isabel Sharman, as the storyteller, accompanies the narrative with melodies on a violin. Venetia Twigg plays most of the supporting characters, from grandmother to jolly old Santa himself. There are also some lovely physical moments – a snowball fight soundtracked by beautiful vocal harmonies and a reindeer with hands for antlers, which kept the young audience entertained throughout the 45 minute production.

The ending is incredibly upbeat: like the original, she does go to visit her grandmother on the moon, but this time she returns to earth to enjoy many future Christmases with her mother. There’s lots of talk about “spreading the light of Christmas joy” and the moral was clear, albeit heavy-handed: if you are good, good things will come to you. It is possible, however, to make children’s theatre that doesn’t depend upon everything working out in the end, and the unrelenting cheerfulness of this production can become a little tiresome. It all depends on whether you think a final “happily ever after” is compulsory for a children’s Christmas show.

The Little Match Girl is on tour until March 2016. Check out their website http://www.moononastickproductions.com for details.