Review of: No Villain

Arthur Miller's very first play is a classic tale of fathers and sons, torn apart by their principles, and receives a competent and confident world premiere at the hands of Sean Turner

It seems remarkable that No Villain, the very first play the legendary Arthur Miller wrote, is first being staged in a pub theatre in London in 2015. The play, which Miller wrote in an attempt to win a $250 prize at the University of Michigan in 1936, was gathering dust in the University’s archives for nearly 80 years before it was dug out by Sean Turner, who directs this production, the play’s world premiere, at Islington’s Old Red Lion.

With its naturalist dialogue and intimate setting, it is instantly recognisable as Miller. David Bromley plays Abe, the ageing owner of a New York clothes factory, which, due to a widespread strike of recently unionised workers, is failing. George Turvey and Adam Harley play his two sons Ben and Arny, the former a hard-working helper at the factory, the latter – the Arthur Miller character – a student, returning home for the summer to be confronted with a moral dilemma: sacrifice his Marxist principles and help at the factory to ensure his family’s survival, or stick to them and betray the love of his father.

It is, like much early Miller, a fairly translucent critique of the American way of life. Abe, an old-fashioned materialist who owes his success to no-one but himself, simply cannot understand what motivates the workers to revolt. “This is something brand new”, he remarks with bewilderment. “They are calling it principles.” Arny, on the other hand, because of all the “fancy books” he has been reading, is alight with optimism, burning with the hope of a better way of living.

In its opposition of idealism and realism, of father and son, of old and new, No Villain recalls both The Man Who Had All The Luck and All My Sons, but whereas the brother figure is largely absent in those, here he is the pivot upon which the piece rests. Cherishing the same principles that drive his  educated older brother, but forced to sacrifice them through loyalty to his father, Ben is Miller’s original tragic hero. Like Chris Keller and John Proctor after him, he is a man trapped by his principles. 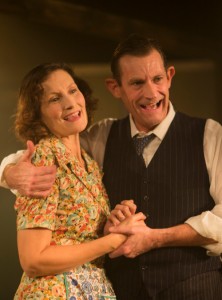 It is Turvey, as Ben, that makes Turner’s production so engrossing as well. Like a latter-day Captain America, he shoulders Ben’s responsibilities with a world-weary yet courageous determination in a performance that feels thoroughly truthful. Bromley and Harley are similarly believable, and there is good work from Nesba Crenshaw as well, who imbues Abe’s wife Esther with a fidgety anxiety and, later, an arresting, hand-wringing despair. Max Dorey also deserves credit; his richly authentic set provides a complementing intimacy.

Miller, presumably in a rush to claim that $250 prize, apparently wrote No Villain in just six days and, without any criticism of Turner’s production, it does show. The play doesn’t feel as fully-fledged, as definitive, as his other work and, like The Man Who Had All The Luck – which was recently produced nearby at the King’s Head – it lacks a satisfyingly dramatic climax. Miller was a politicised 20-year old student when he wrote it and, although this youthful fire supplies the paly with an infectious urgency, it also renders its dialogue a little polemical at times.

Miller called No Villain “the most autobiographical work I would ever write”. It is baffling then, that it has taken so long to see the light. Huge credit must go to Turner, firstly for seeking out such an important piece and secondly for staging it with such absorbing vitality. He is right when he states that his production “presents a rare opportunity to discover the genesis of Miller’s mastery of the dramatic art”. No Villain is a window, through which we are able to divine what motivated one of the great dramatists of the 21st century to take up his pen.