Angus Jackson's production might tug at the heartstrings, but sadly the pacing of the piece undermines moments where it should have been at its most poignant.

Goodnight Mister Tom must surely be one of the more challenging children’s books to adapt for stage, especially considering the length of the material and the nature of issues dealt with – child abuse, religious fanaticism and WW2 bombings all jostle for attention within its pages. Nevertheless, Angus Jackson’s manages to pull off this quietly heart-breaking tale with both grace and vigour. 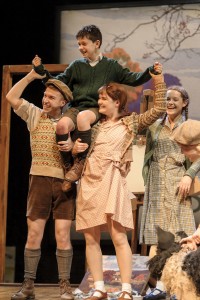 Both Alex Taylor-McDowall and Oliver Loades should be commended for their interpretation of the irrepressible Will and Zach duo, playing off each other like seasoned professionals, however, it is David Troughton as Mister Tom who really captures the audience’s hearts. Slightly aggressive, grumpy and yet with a warmth that beams the length of the theatre, Troughton takes the role in his stride and, alongside a fantastically puppeteered Sammy (Elisa de Grey) provides the audience with many a wonderfully tear-jerking moment. In this, credit must also go to Gregory Clarke and Matthew Scott for masterminding the simple songs sung by the cast that pepper the piece – there is something absolutely beautiful about unpretentious, non-harmonized singing that perfectly captures the good-natured, unassuming atmosphere of the show.

The picture-book nature of the set creates a wonderful illustrative atmosphere, consisting of very little apart from door-frames and a few wooden chairs. It fits the rather light first act rather well, with scene changes and character introductions gaining considerably more amounts of energy the further along the piece progresses, especially after the interval. This is a problem that is, however, fundamentally engrained in the structure of the show; the entire first hour feels slightly like one long set-up for the far more energy-packed Act 2, having to create a country idyll out of nothing in order to consequently tear it down again. However, once we do progress into the grimy London set, physically embodied by a huge, clanking London bridge building Willy’s childhood home, all these problems disappear. It seems as if the entire show is waiting for this appearance, every scene in the dingy city set sparkling with a clarity and determination that is slightly absent from the earlier Dorset sequences.

The issue is that, considering the length of the original text, translating all the major events onto stage in 2 hours 15 is nigh impossible, leaving the pace of the show confused at points. Certain climactic events, such as Zach’s death, don’t quite have the dramatic effect intended, being somewhat skimmed over and thereby undermining the heartwrending scenes that follow. It occasionally feels like the production was focussing on just getting the book on stage rather than actively using the medium of theatre to tell a story that had previously been set in book form. This is a shame, especially considering the remarkable acting talent present onstage. However, it still has a kindness and a generosity about it that few West End shows nowadays possess, and, pacing issues notwithstanding, fits in beautifully with the Christmas spirit.