Review of: All On Her Own/Harlequinade

It is genuinely quite remarkable that the same playwright could produce both All On Her Own and Harlequinade. Granted, Rattigan wrote the latter, a farcical comedy satirising the theatre, in 1948 when he was the darling of critics and audiences alike, and wrote the former, a intense monologue presenting a schizophrenic widow meditating on her own loneliness, 20 years later when he was about as fashionable as the Vietnam War, but the difference in tone is still startling. 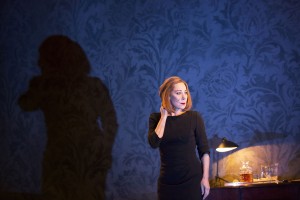 Shoe-horned into an interval-less 100 minutes, both are presented in a double bill by the Kenneth Branagh Theatre Company at the Garrick, running alongside The Winter’s Tale until mid-January. One might think that two such disparate works may sit awkwardly alongside one another, but they actually complement each other well. They challenge the audience in different ways, and artfully reveal Rattigan’s range and sensitivity. Kenneth Branagh is to be applauded for such insightful, inspired programming.

In All On Her Own, Zoë Wanamaker plays Rosemary, the widowed wife of a northern builder, wracked with guilt over his death and drinking heavily to comfort herself. As Rosemary mopes around her clinically minimalist living room, downing tumbler after tumbler of whiskey, she begins to imagine a conversation with her late husband that forces her to confront the truth about their relationship.

Wannamaker is nothing short of magnetic. Her anguish, her torment is writ large across her face and it is testament to her versatility that she manages to create an engrossing dialogue all on her own. She provides a powerful opening 20 minutes to this double bill, in which Rattigan plumbs the depths of loneliness with delectable subtlety.

At the monologue’s conclusion, there is a great leap in tone as the curtain falls and rises to reveal Arthur Gosport (Branagh himself) and Edna Selby (Miranda Raison) hamming it up as they rehearse the balcony scene in Romeo and Juliet. This is Rattigan as he is usually remembered. Harlequinade is witty, irreverent, and silly in the extreme.

Tom Bateman does well as Jack Wakefield, an overworked stage manager trying to run a touring Shakespeare company, and having to indulge the idiosyncrasies of the company’s cast, led by Branagh’s Gosport and Raison’s Selby. Irritated actors, illegitimate children, and impatient fiancés are all thrown into the mix as Wakefield’s task grows harder and harder. Branagh’s skittish Gosport is a delight, as is Raison’s trilling Selby. Wanamaker also makes another competent appearance as the jaded Dame Maud and Hadley Fraser is adorably earnest as a timid member of the supporting cast, determined to seize his chance in the spotlight.

Although there are some sly pokes at subsidised theatre – Rattigan was writing in the years immediately after the establishment of the Arts Council – that remain relevant today, there is little immediacy, little vitality to Harlequinade, entertaining as it is. It is a snappy, polished piece, but one of little substance. It is painfully clear why Rattigan’s star fell in a world of John Osbornes and Joe Ortons.

By presenting All On Her Own and Harlequinade alongside one another, Branagh has provided audiences with a revealing showcase of Rattigan’s skill. It provokes the viewer to re-evaluate their opinion on Rattigan and firmly contends that he still has a place on the 21st Century stage.