Writing that sparkles with wit and humanity: not so much skating on thin ice - as pirouetting with verve and aplomb

We are an age obsessed with identity. Within the modern politic it is the one card which trumps everything else. To claim that someone is failing to respect your identity is the crime above all others. It has led to many bizarre elements of modern discourse: from the student led calls for more college censorship – led by a generation who fear being offended above all else, to the increasing desire to silence anyone speaking or campaigning for the plight of people who don’t share their identity. Empathy, the ability to understand the emotions and situations of others, which has been the inspiration for so much social reform, is no longer to be trusted.

We have created an atomised discourse of separate, immutable, unquestionable identities. It is the right wing libertarian subversion of the struggle for civil rights – seeing each carefully defined identity as a rugged individual set apart from all others. It has spewed a whole new vocabulary to make sure each of these newly pigeonholed identities can be kept in their intellectual confines – cisgendered, transsexual, poly-amorous, androsexual, bigender, pansexual, skoliosexual, third gender… 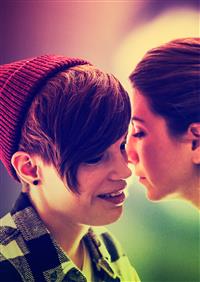 In order to free people from the reductive tyranny of traditional binary definitions of sex and sexuality we have created a whole host of new definitions to add to them. Perhaps they were necessary, but, as with all attempts to pigeonhole the human condition, they risk being reductive and stifling of a state far more complex than a dictionary definition could ever capture. With this as it’s backdrop Jon Brittain’s play is a funny, moving and subtle take on what happens when two such immutable identities clash.

We begin the play at new year in Rotterdam – Alice is plucking up the courage to email her parents and tell them she’s gay. But before she can hit send, her girlfriend reveals that he has always identified as a man… and now wants to start living as one. The show then focuses on the various questions that arise out of this new situation – not least does this mean that Alice is now straight?

Jon Brittain’s script does a superb job of dealing with the complexity and subtlety of the issues he’s engaging with. In an age so fraught with fear over causing offence he walks the fine line of interrogating and occasionally satirising the po-faced modern discourse without ever letting it feel like he is belittling the experiences of the groups he’s writing about.

His writing sparkles with wit and humanity: not so much skating on thin ice, as pirouetting with verve and aplomb. Yes – it may be the case that some of the characters could have been fleshed out more – Lelani, played with humour and an infectious energy by Jessica Clark, was the archetype of the manic pixie dream girl – there to test the boundaries of the other characters rather than necessarily enjoy her own character development. And, in the fairly limited opinion of my companions and I, the script could have had around 30 minutes shaved off and still achieved all it did. But despite these small criticisms, it was a masterly work by a writer at the height of his powers.

With such a strong script to work with, director Donnacadh O’Briain had to do very little to let it shine. And arguably he made the right choice in putting all the focus onto the dialogue. Though working – as I do – from a physical theatre background – I just wish there had been a bit more to the show than the script. The production could have been transposed to the radio with virtually no need for any changes. Theatre is a visual medium and it’s a shame that the production didn’t make use of this.

Ellan Parry’s design for the show is based around a patchwork of prints of Rotterdam, cubes and boxes – both attached to the walls and free standing so they can be rearranged into the various tables, chairs and interior spaces of the show. The idea was great, but the execution didn’t quite pull it off, for example a mirror attached to the back of a door kept reflecting the audience back at itself, which might have been deliberate, but even so, was still quite distracting. And while the boxes worked well to depicting the various interior spaces they weren’t flexible enough to create the exterior scenes of the show.

Keegan Curran’s sound design was perfectly pitched in its choice of music: a kaleidoscope of euro pop which kept the energy fizzing along. However I’m not sure if Theatre 503 were experiencing some technical difficulty with the sound the night I saw the production, for the levels for ambient sounds where at the extremes – at times so quiet as to be ineffective, and by turns so loud as to distract. Richard Williamson’s lighting design was fantastic, it can’t be easy creating so many atmospheric lighting states with such a limited rig on a predominantly white and multi-faceted set, but Richard’s design did an admirable job.

Once the cast had warmed into the show they were excellent. It wasn’t wholly their fault that they took some time to relax into the show, they were left on stage for a 15 minute preset making business with not very much to do, so I suspect that was time enough for their nerves get the better of them. There is no reason why a 60 seat venue should take 15 minutes to seat, so if it’s part of O’Briain’s vision to have a preset with cast on stage they could easily cut this to 5 minutes.

However once they had warmed into the show they were a joy to behold. Particular mention must be given to Anna Martine who did a virtuosic job portraying a character in flux. Alice McCathy hit the right note of uptight expat with her portrayal of Alice, while Ed Eales-White’s hapless Josh is a much needed light relief to the intensity of the central relationship. The cast were much more at ease with dialogue than in opening up and manifesting physical spaces – a roof top scene overlooking Rotterdam, and a midnight excursion onto a frozen canal both failed to materialise in the actors’ bodies. Though as I’ve already noted this is largely not their fault in a production which clearly focused on dialogue rather than physicality.

Rotterdam is very much a play of its time – exploring the idiosyncrasies and peculiarities of the current narrative around sexuality and gender. As with all very timely plays I wonder how relevant it will feel in a generation’s time. But to paraphrase the sentiment expressed by the main protagonist when asked if gender really matters; it may not be at all relevant in a generation’s time, and that might be a very good thing, but it is relevant right now and that’s all that matters. As with all good theatre, Rotterdam is more concerned with raising questions than providing answers. It interrogates and problematises contemporary narratives whilst dealing with complex and emotional issues with subtlety, wit and humour. The standing ovation it received the night I saw the show is testament to how well it achieved this.