A brilliant homecoming for La Soiree in a show destined to go down a storm.

A homecoming is always a perfect time to celebrate. After over a year touring the world, Cabaret troupe La Soiree’s glorious and long overdue return to Southbank’s Spiegeltent was definitely a raucous party, filled with songs, bubbles and sexy diabolo performances to warm the cockles of a packed audience on a cold November night. 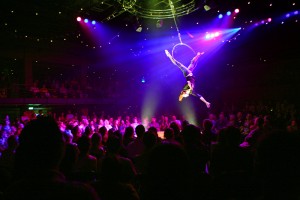 Indeed, La Soiree’s opening night (opening Soiree?) was a fantastic tour-de-force. An audience split between newcomers and returning fans saw the beautifully-ornate circus tent setting humming with vibrancy and expectation. Yet rather than be dwarfed by their surroundings, the performers in La Soiree seemed to slip naturally back into their home venue. ‘Cabaret’ acts can often come with certain connotations, but this particular event provided a veritable feast of different talents.

It is impossible to highlight every single performer, yet suffice it to say that the calibre of the acts was consistently high – swordswallowing, contortion, acrobatics (on a motorbike!) and a huge number of other performances provided the audience with laughs, gasps and applause on a minute-by-minute basis.

If there was to be a standout (to use the word standout is difficult, given the sheer number of performers), it would be Denis Lock and Hamish McCann as the two English gents. Their whole act, a subtle swipe at the outdated tendencies of British aristocrats, was an impeccable show of pure strength and poise, which, when the opening act for an entire run, is a difficult thing to achieve. Lock returned later to the stage for what will surely go down as one of the most memorable performances of La Soiree – armed only with a pipe, a straw, and some bubble mixture, he created works of art that, fleetingly, shocked and amazed audiences. Lock’s act was a metaphor, perhaps, for the whole experience – a beautiful object fabricated only briefly, held together so delicately, before disappearing and lasting only in the memories of those who witnessed its existence.

For all these musings, La Soiree was a rollicking good ride, with laughs and woops abound. Asher Treleaven, the archetypal ‘sexual gentleman’ was an incredible diabolo performer who later went on to provide a perfect rendition of extracts from Mills and Boon.

It isn’t hard to see why La Soiree won an Olivier Award in 2015, and will continue to shock, amaze and excite audiences across the globe. In that spiegeltent, all that existed was a wonderful spectacle that kept audiences laughing, sweating and gasping, before exiting back to the chillier London nights.