a solid if safe comedy line-up

The Exeter Northcott does not seem very friendly venue for stand-up comedians: namely, it’s borderline too large. Thankfully, the audience (largely with pints in hand) packed itself into the front section of the theatre, lending a camaraderie that would have been lost had they been dotted about the auditorium. On the whole, the two-hour comedy set from Jongleurs Comedy Club – featuring three comedians and a compere – was riotously received by the crowd. The pacing is excellent; the longer pre-interval set consisted of the compere’s warm-up act and the first two comedians, and the interval was followed by more compere crowd workings and the night’s headliner. While the humour veered towards the hackneyed at points, the laughter was genuine and the evening highly enjoyable.

The first act was Matt Brown, Plymouth born and bred, who greeted us in Exeter as ‘ya Northern bastards’. He endeared himself to the audience with tales of his technological struggles: his first phone model turning up London’s Science Museum, reenactments of satellite TV tuning (the placebo effect is ‘someone pressing the remote and saying “It’s getting better!”‘), and the struggles of living alone.  Apparently the inability to buy single-person cans of pâté is a real issue.  He ended with a rant against bread-makers and his plan, after making back his investment in homemade (but easily moulding) bread, to throw the pointless appliance to the ducks (who enjoy his homemade mouldy bread more frequently than he does).

Despite his shiny scarlet shoes, Stuart Black was the weakest link of the night.  He certainly cut an odd figure on stage, with his skinny figure dressed all in black (save for the aforementioned shoes) and topped with spiky sandy hair.  Perhaps this dip in the overall humour was due to the fact that some of his humour veered from ‘hilariously disgusting’ to ‘disgustingly disgusting’.  That said, his bit on the innate oddness of human feet in all their various shapes was excellently judged and delivered.

The two pre-interval comedians had a hint of amateur awkwardness about them.  However the headlining act, Quincy, had none of this.  He worked the crowd with ease, never seeming stuck for words or where to pace.  He chronicled his adventures in sports and his love/hate relationship with his East London roots, including his personal goals in bench pressing (to beat his sons, pure and simple) and the shared goals of all East Londoners (‘to earn enough money to move the f*** out’).  The only downsides to his set were his tendency to mumble – a fatal flaw in comedy – and a well-intentioned but perhaps misjudged section on the transgender community. 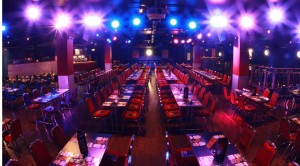 Fatherhood featured as a theme in all three comedians’ sets. The first two took different spins on the classic theme of turning into one’s father. Brown saw his fate firmly laid out before him in his behaviour and appliance purchases (such as the infamous bread-maker), while Black is still holding out in resistance (or denial) that he’ll turn into the distant, humourless man who raised him.  In one possibly flawless section, Quincy performed from the other side: the perspective of the father attempting to keep the respect of his children (read: authority to make them take the bins out) and not go down in the amateur boxing arena.

Compere Danny Ward was the most memorable part of the night, providing such one-liners as ‘Like most comedians, I just got out of a relationship’ and ‘I read Men’s Health ironically, with a pie and pint’.  An extended sketch about drinking to get drunk followed the latter, culminating in the argument that if people drank purely for the taste (and ‘whoever says that is a f***ing liar’) they would be stumbling around the streets at 5am looking for their tenth pint of pineapple juice (and yes, pineapple juice was the example only because it led straight into the next section).  Ward tied the evening together superbly and was the most consistently funny of the bunch – both a strength and a weakness.  While I’d never want his opening routine and joining bits to be less entertaining, I wanted the main acts to equal or exceed his strength.

Jongleurs delivered a solid if safe line-up at the Northcott; while many routines lacked fresh perspectives, they did not fail on the humour.

More information on Jongleurs can be found here.