Daphne Du Maurier’s best known novel, Rebecca, is so successful that in the 77 years since its publication, it has never gone out of print. It is not difficult to see why. It brims with romance, intrigue, suspense and gloriously gothic horror and, as Alfred Hitchcock’s 1940 movie version proves, it translates particularly well from the page to other mediums. Seeking to capitalise on the story’s eternal popularity, Kneehigh Theatre have adapted it for the stage in typically anarchic fashion, and are now approaching the last legs of a lengthy autumn tour. 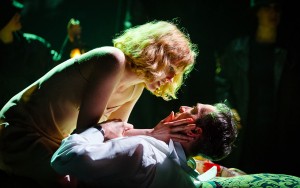 Their production is, in many respects, a success. The Globe’s Artistic Director-elect Emma Rice’s direction is skilful and creative, the cast produce a series of solid performances, and Leslie Travers’ set is a spectacularly jumbled, dream-like arena of sunken ships and sweeping stone staircases. Despite all this, Kneehigh’s Rebecca is never more than mildly engaging, principally because it can never seem to make up its mind as to what it wants to be. It is at times a tense, concentrated page-turner of a play and at times a self-effacing fun-filled chaos.

Imogen Sage is Mrs de Winter, the innocent, young wife of Maxim de Winter (Tristan Sturrock) who returns to her newly-wed’s Cornish estate only to be driven halfway round the bend by the memory of his recently drowned first wife, the glamorous Rebecca. It is a familiar story, but one that never loses its capacity to chill, right from its famous opening line: “Last night I dreamt I went to Manderley again”.

Sage is perfectly timid as Mrs de Winter but, contrary to Rice’s claims that the play features complex female characters, hers is fairly one-dimensional role until the final scenes. Sturrock is everything he should be as Maxim – distant, mysterious, and condescending – and there is good work from Andy Williams and Lizzie Winkler as the bombastic Giles and gregarious Beatrice respectively. Emily Raymond appropriately austere as Mrs Danvers, but somewhat over-eggs the pudding on the cold, menacing side of things.

Melodrama, though, is to be expected. After all, Du Maurier’s work was not popular for the intellectual punches it packed but for its sheer page-turning thrill. Rice – who adapts as well as directs – has undoubtedly captured the turn-of-the-screw tension of the novel, but is not afraid to have fun with it either. Exuberant dance scenes, a puppet dog, and a squeaky Welsh bellboy (Katy Owen) all feature heavily. It is refreshingly un-serious stuff but these merry interludes do tend to compromise the enigmatic atmosphere, leaving the production is left in limbo between period thriller and hammed-up comedy.

Rice has worked to imbue the piece with the harsh winds and waves of Cornwall, presumably an attempt to echo the stormy emotions of the story. Travers’ set is dominated by the shattered hull of a sunken rowing boat, hearty sea shanties are sung by cagoule-clad fishermen at every scene change, and the sound of the ocean is an almost constant presence. Although effective for the most part, the constant evocation of the rugged Cornish coastline also contributes to the general disorienting eclecticism.

On the whole, Kneehigh’s Rebecca is far from ground-breaking theatre. It is a mixed bag of laughs and thrills that only really clicks in fits and starts.

Rebecca will be continuing its run at the Oxford Playhouse till 21st December at 19:30 every day, before visiting Sheffield’s Lyceum Theatre and Southampton’s Mayflower. You can book your tickets at www.kneehigh.co.uk.