Despite some flaws, Invisible Treasure exists as a fantastic show, and shows the exciting direction theatre is moving towards.

Any piece of theatre that attempts to do something fun, exciting or bold has to be commended. In that respect, FanSHEN’s Invisible Treasure as part of the Ovalhouse’s FABULISM season, is a wonderful experience – ‘no actors, no plot’ are apparently all you need to have a good time. A group of 20-30 individuals are led into a small, seemingly inescapable box, where they are subjected to a series of tests by a faceless computer screen. There’s also a giant stuffed rabbit in the corner. As time progresses, the challenges become more elusive and confusing, leading the audience to question exactly why they are there, what does it mean to be subjected to these tests, and, ultimately, how easy would it be to disobey their orders?

The play is incredibly refreshing in its concept. Audiences are granted a new form of agency, capable of influencing their own theatrical experience as they decide what to do and what not to do. It is a deeply experimental piece – projection, recording, looping and motion sensitivity are used to great effect and no doubt a great deal of trial and error went into refining what could easily be a technical disaster. 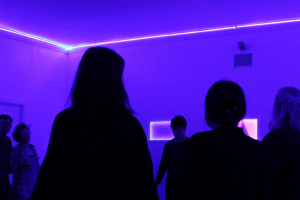 What was most striking, emerging after 70 minutes of treasuring invisible concepts, was that the process had unified the audience. Smiles were exchanged, goodbyes were wished, and a fostering of community had begun within a confined box – an incredibly powerful result.

However, something seemed irksome about Invisible Treasure. The show’s intention was to show its audience how a subversion of obedience, and breaking from the shackles of our virtual reality was a means of creating freedom for ourselves. No doubt the audience experience will differ from day to day, but on this one evening what emerged was not an active defiance of the wishes of the testers, but instead a frustrated resignation that there was no idea what the screen wanted – people were running all over the place, trying to find a solution, almost wishing beyond anything to be able to please the screen and the giant, artificial bunny rabbit. Rather than managing to subvert authority, the vast majority of the audience instead were trying desperately to please their faceless masters.

All of this made the end result seem slightly abrupt. No doubt the show and fanSHEN will tinker with the formula to provide the most suitable audience experience, but it seems that a little more clarity may turn this show into an incredible piece of experimentalism. Nevertheless, Invisible Treasure still exists as a fantastic show, and shows the exciting direction theatre is moving towards.