As I clutched my press tickets excitedly and entered the auditorium at the Northcott Theatre to see Terence Rattigan’s Flare Path, I wasn’t sure exactly what to expect. I’ve seen plenty of wartime productions before, as I’ve always found it to be an extremely interesting era; Lotty’s War at the Northcott last year was a particular highlight for me, also starring Olivia Hallinan funnily enough, but it’s difficult to know exactly what to expect from a play described by Winston Churchill himself as ‘a masterpiece’.

Directed by Justin Audibert, Flare Path is based on Terence Rattigan’s personal experiences of World War II, during which he worked as a tail gunner (a crewman whose job it is to defend the tail of the aircraft against enemy attacks). The play explores the experiences of RAF bomber crews and their wives during the war, and the uncertainty and angst felt by all at that time. The main focus is on Patricia (Olivia Hallinan), whose marriage to RAF pilot Teddy (Alistair Whatley) becomes strained upon the return of her ex-lover, Peter Kyle, played by Waterloo Road star Leon Ockenden. Patricia struggles with both concern for the pilots fighting in the sky and unease over her fragile relationship, culminating in a highly emotional and nail-biting couple of hours for all involved. 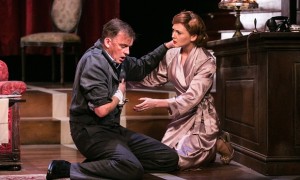 The set really struck me upon first entering the auditorium; both historically believable and visually impressive, the lobby of Lincolnshire’s Falcon Hotel really comes alive, supported by authentic costuming and superb visual effects. The production’s innovative lighting design changed with both mood and time, creating an eerie atmosphere in the sombre moments, before brightening up with the arrival of a new day. Clever lighting also created the flare path, an illuminated airstrip from which the planes ‘take off’ over the stage. The lighting of the flare path is aided by incredibly realistic sound effects, which truly made the audience feel as if a plane had taken off over their heads.

While Olivia Hallinan and Leon Ockenden shone in the leading roles, the biggest acclamation must be given to Adam Best and Siobhan O’Kelly as Count and Countess Skriczevinsky. Although their characters’ story was supposedly a subplot to that of Patricia, Teddy and Peter’s love triangle, they stole the show in my opinion with such honest and emotional portrayals of their characters. I both laughed and cried with Doris and her husband, and truly rejoiced in their happy ending.

Although I must admit that the play took a little while to get going, once the first half hour or so had passed the pace really picked up, completely enveloping the audience into the world of the play. The script must also be commended for the interjection of multiple humorous scenes into the dramatic action. While some humour may have been missed on a student such as myself, the audience, most of whom were from an older generation, chuckled away at various scenes, which served as light relief against the melancholic backdrop of the rest of the play.

All in all, Flare Path was a greatly enjoyable production. Humorous, melancholic, dramatic and poignant, it remembers a hugely important time in our nation’s history – and one that should not be forgotten.

Flare Path ran on tour from 18th August till 28th November. Further information regarding the play can be found at http://www.flarepaththetour.com.