Tooting Arts Club’s choice to revive Barrie Keefe’s 1977 Barbarians in the Old St Martin’s School of Art is little less than a stroke of theatrical genius. Though known as the birthplace of modern punk, with The Sex Pistols performing their first gig at the School (to be then thrown off stage after 20 minutes), the now derelict building has a certain haunting quality. Graffiti litters the walls, names and sayings are etched into toilet cubicles. The fact the building is scheduled for demolition is also incredibly pertinent – both the play’s stage and its subject matter seem to exist on the eve of extinction. 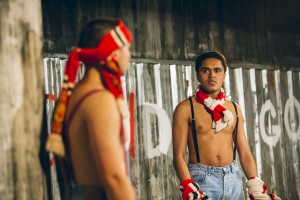 Indeed,  a perturbing nostalgia seems to surround the show. Cans of strongbow and scuffed up snooker tables greet audiences when they arrive, alongside a soundtrack fit for any 1970s adolescent – The Sex Pistols, . The youthful vigour of the three actors (Thomas Coomes, Jake Davies, and Josh Williams, each a physical tour-de-force of relentless energy), though originally infectious, quickly becomes less optimistic and more jarring as Keefe’s series of one-act plays continue. Each chronicles a key moment through the lives of three men – Paul (Coombes), Jan (Davies), and Louis (Williams), as they face economic depression and unemployment. The audience are dragged from derelict room to derelict room, witnessing the disintegration of a jovial masculinity and emergence of grittier, more disconcerting reality.

Director Bill Buckhurst and Designer Simon Kenny’s choice to house each part in three different rooms is a fantastic one – not only are audiences allowed to walk through the rooms of St Martin’s, but the character of each segment is allowed to shine through. The more immersive first act, with actors running amock, is replaced by an end-on stage in the second segment, with a giant, opaque fence forcing the actors into a narrow, empty space – squeezed, unable to escape. In the final segment the audience circle a hazy room, creating a vast expanse for the closing scenes to unfurl. The youthful abandon of the opening scenes becomes more and more constrained as time progresses, ramping up the tension as the lives of the characters fall apart.

The parallels between the present and 38 years ago could not be more pronounced – soaring youth unemployment in both instances leading to a significant social anxiety, while a supposedly disenfranchised segment of society grow disillusioned with making any form of a sustainable life.  The future is bleak – even the career support officer is on the dole.

While the vast majority of the play lands with awe-inspiring success (particularly Davies’ closing monologue about Jan’s mother, which hits the perfect side of tragedy when it could have easily been played as a farce), sometimes the show’s tripartite organisation can reduce the impact of the show’s most emotional segments. The racial themes of the final part, for instance, are never as vocal earlier on in the play and as such the closing moments of the play may not be as pronounced as they could have been.

Nevertheless, Keefe’s play, once a cutting and contemporary piece, has now ripened and transformed with age. Its characters are a distant memory to the London capital. Its concepts of unrestrained masculinity have been chipped away and transfigured, which make it all the more gripping when returned to the heart of the city.

Barbarians plays until the 7th November. Tickets at http://www.sohotheatre.com/whats-on/barbarians/ .