Review of: Tonight I'm Gonna Be The New Me

Produced by:
Made In China

Intriguing but unfulfilling look at modern relationships and personal narratives.

‘Tonight I’m Gonna Be The New Me’, Made In China’s latest offering, opens with a frantic physical overture. Jess Latowicki’s dance – sometimes sexual, often joyous – offers an abstract and intriguing, if unclear, opening to this flawed meditation on the nature of relationships, and the way we present ourselves to the world. As a performer Latowicki is both charming and terrifying and the movement-led elements of the piece let her demonstrate both her deep physical vocabulary and talent for physical comedy. Humour aside the dance is entertaining yet disappointingly vague – something that could be said for what follows. 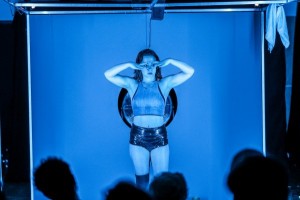 If Jess is to be believed, her boyfriend, Tim Cowbury, has written the script, putting his words, his account of their relationship, into her mouth. We have to take Jess’ word for it – Tim, present in the lighting box, is only given fleeting stage time, fetching Jess a beer and occasionally, reluctantly, disputing his girlfriend’s version of events. We’re meant to question this premise though, as it seems to be Jess, rather than Tim, that has the knack for putting words in peoples’ mouths. She tells people how to think and what to say, and seems to get the answers she wants to hear. Dragging various audience members into the performance, she asks each a question, before telling them the answer she wants to hear. Gamely, everyone Latowicki chooses tonight plays along – perhaps out of respect, perhaps out of fear. Certainly we begin to understand that this might just be Jess’ fantasy rather than Tim’s work. With considerable irony, after one of these performer-audience exchanges, Jess states that “no one can tell you how to think”, which is exactly what she’s achieved.

If we accept that this is, nominally, Tim’s work, the script is meant to fall apart. Jess questions many of the scripted statements; he offers her feedback on lines that she has skipped until she ‘refuses’ to go on until he leaves the space. It’s a difficult device to use and for all its form-challenging potential it doesn’t really work because the performance lacks risk – it’s all too staged, too rehearsed. We’re unable to believe that Jess is actually vengefully or desperately destroying the performance. It’s a brave move by the couple to mine their relationship, warts and all, for material but rehearsed and performed over and over it falls flat. A highlight was a sustained back and forth, both performers firing shots at each other, calling out the other’s perceived faults. It was raw and real and I wanted more of it.

Questions of voyeurism were also raised as Jess complained about Tim watching and making notes on her. She thinks “it’s creepy” and, in a meta way, I suddenly felt very uncomfortable sitting there with my notebook in hand. All spectatorship is potentially voyeuristic but I’d never considered the idea of ‘critic as creep’. I appreciated the discomfort I felt on a personal level whenever she criticised Tim for his notes.

‘Tonight I’m Gonna Be The New Me’ doesn’t reveal anything very new about its subjects. As it felt like nothing was really at stake I ultimately didn’t care about the central relationship. However, Jess and Tim’s repartee’s were entertaining and Latowicki’s darkly bubbly persona contrasted well with Cowbury’s quiet restraint – all reserved and British compared to her gregarious Yank. Made In China’s piece is intriguing but flat, generating hints of interesting ideas, but ultimately not following through on any of them.

TONIGHT I’M GONNA BE THE NEW ME will be continuing its run at the Soho Theatre until the 26th September. Tickets can be found at: http://www.sohotheatre.com/whats-on/tonight-im-gonna-be-the-new-me/