Review of: Dinner with Saddam

A funny but unfulfilling farce which leaves a bad taste in the mouth as it tries, and fails, to meld humour and politics.

Can Horowitz write an enjoyable, entertaining farce? Yes. Should he have written a farce about this subject? Not for my money. At its best ‘Dinner with Saddam’ is a funny, if fairly obvious, farce that encompasses all the conventions of the genre, and doesn’t lack for jokes. Lindsay Posner’s take on farce can’t be described as a box ticking exercise as there are plenty of genuinely entertaining moments. Ultimately however the play is confused and silly. Politically, Horowitz is on shaky ground as he reduces Saddam Hussein’s brutal totalitarian rule into a comedy with an over reliance on poo jokes. To Horowitz’s credit, however, his material also portrays all parties – Saddam, Bush, Blair, East, West – as the villains of this tragic period of Iraqi history. Tackling the subject in this way at least allows Horowitz to make valid political points, but these are completely undermined by the comedy. 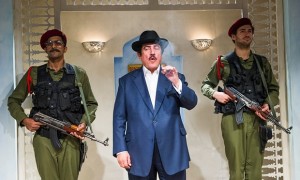 The Guardian’s Zainab Salbi has written that “anyone who criticises Dinner with Saddam as inappropriate in the fun it has with Iraqis’ fear of the dictator, bite your tongue. It’s in line with Iraqi culture to make fun of our own misery”. For me, however, there’s something deeply uncomfortable about a white privileged British author writing a play to make middle class British theatre-goers laugh. Perhaps Horowitz anticipated this problem – Ahmed (Sanjeev Bhaskar) decries theatre as being “written by someone who doesn’t have a clue what they’re talking about”, and we might consider this a knowing wink to the audience. His heart is clearly in the right place writing ‘Dinner with Saddam’, but it is very questionable territory.

The writing isn’t completely solid either – a number of the jokes don’t work, or only work because of the quality of the acting. Colonel Farouk (Ilan Goodman) is utterly ludicrous. This is partially due to Horowitz’s writing – if his penchant for horticulture is meant to humanize him, it doesn’t – and partially due to Goodman’s accent which makes the character intimidating certainly, but in a comic book villain kind of way. This seems to be in bad taste for a torturer – presumably based on any number of Saddam’s henchmen.

The cast, for the most part, are very good. Samira (Shobu Kapoor) gets many of the early laughs as she wittily puts her husband down. After a slightly slow start Bhaskar is very good as Ahmed – his physical comedy, which grows more and more desperate as he strangles Saddam’s bodyguard, and his panicked monologue as the dictator approaches the door, are highlights. Casting a white actor to play Saddam Hussein (Steven Berkoff)is questionable. Berkoff, however, is compelling – both funny and terrifying, flitting between the two with ease and often surprising us with the change. Indeed, Berkoff plays it as if even Saddam doesn’t really know what he’s feeling.

It is the hardwork of the cast that lift what is a very flawed work. Horowitz can be funny and he can be political but, disappointingly, he cannot be both at the same time. The seemingly tragic ending of the show redeems much of the jokes made in bad-taste earlier in the production, as we’re reminded of the human cost of disastrous Western intervention, but ‘Dinner with Saddam’ is ultimately too shallow with too much farce and too few politics. It is sadly not the mouthwatering new play we were promised.

DINNER WITH SADDAM plays at the Menier Chocolate Factory until the 14th November. Tickets can be purchased from the Menier website – https://www.menierchocolatefactory.com