Review of: The Bald Prima Donna

This play ended as it began; same set, same positions, same dialogue. The only difference was that the two original actors from the start of the performance had been replaced by two other actors who had previously been playing an entirely different couple throughout the play. Confused? I think that was the point. 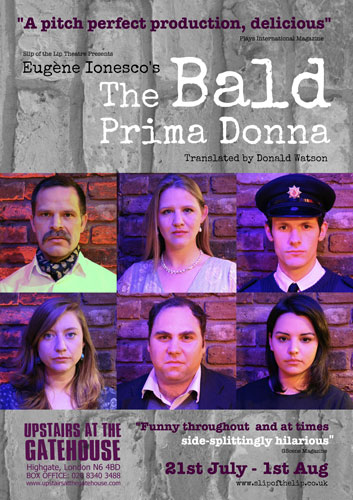 Welcome to the world of ‘The Bald Prima Donna’, Ionesco’s absurdist drama exploring what we (the audience) and they (the characters) are left with after the total and complete breakdown of language and communication. In Slip of the Lip’s adaptation we watch as the utterly proper and provincial characters in this British middle class home ‘just outside of London’ engage in endless verbal gameplay where none of them actually says anything of any meaning at all.

It begins in the sitting room of Mr and Mrs Smith. As Land of Hope and Glory played softly in the eves we watched as Mr Smith (Brian Merry) read the paper and Mrs Smith (Griselda Williams) crocheted, and waited for the dialogue to begin. And waited. And waited.

Aside from the odd newspaper rustle and audience titter-snort we sat in silence. The awkwardness was excruciating and contrasted brilliantly with the elegance of the prudish set. The tension finally and thankfully was broken by Mrs Smith’s opening monologue concerning the contents of that evening’s supper; soup, fish, cold ham and potatoes. And mayonnaise. A special mention must go to Williams who charms the audience with her keen grasp on the emotionally corseted Mrs Smith right from the start. Eventually Mr Smith chimed in and it was at that point that we were fully introduced to the absurdity of the play. This was only heightened by the miniature grandfather clock that chimed not only on the hour every hour, but seemingly whenever it pleased. We were no longer in a place where regular time featured.

As the clock struck (again) we were introduced to the Martins (Alice Devine and Peter Easterbrook), long-term friends of the Smiths who were arriving some four hours late to dinner. We never quite found out why …
After engaging in a bizarre game where they pretended not to know one another, eventually coming to the conclusion that they did know one another and were, in fact, married, the Martins embraced and fell asleep – sort of, more glazed over in bliss. Mary (Annie McKenzie), the parlour maid, then entered and informed the audience that neither were who they said they were. Was she right? Was she mad? Was she leading us astray? We just don’t know.

The play continued so on and so forth with the eventual entrance of The Captain of the Fire Brigade (Guy Remy) who had been hiding outside in the bushes. Antics ensued and we tumbled to the end of the play, watching as the characters descended into verbal madness, eventually only able to recite clichés and platitudes to one another. It was at once funny and grotesque.

Director Paul Hoskins and cast managed to draw out the absolute absurdity of this play with aplomb. All the actors found the balance between real and surreal and it was hard not to laugh as they Benjamin Buttoned their way through the play – the more it progressed the less language they had to grapple with. The women in particular stood out, exhibiting beautiful vocals and well-pitched portrayals of their characters.

Hoskins stuck closely to Donald Watson’s original translation and the setting worked. The starchy world of 50’s/60’s Britain, all niceties and good manners, served to heighten the ineptitude of language almost to obscenity. The aesthetics of the set, the repetition and oddity of the language and strained performances were evocative of No Exit – hell may not just be other people but we come pretty close to it with four stuffed up Brits chatting nonsense in a living room, pretending that everything is absolutely fine when it clearly, clearly isn’t.

As I left the theatre on this cold summer evening I couldn’t help but wonder over the idea that if Ionesco was struggling with the frailties and incompetency of language in the 1950’s, what on earth would he have made of language today? What would he have thought of the idea that a modern audience might LOL at his play and that even a review of his work could be tweeted in the Twittersphere? Or that Twittersphere needs to be capitalized?

I’m not sure he’d have the emoji’s to express his retort.